Getting from Barcelona to Alicante Travel Guide

If you are visiting beautiful, sunny Spain anytime soon and thinking of combining a visit to Barcelona with a trip down south to Alicante on the Costa Blanca, then you’re probably wondering exactly how to travel between these two Spanish cities.

If this is the case, then I’ve got great news – this post is exactly what you’re after!

In this article I will outline in detail how to travel from Barcelona to Alicante. Whether doing so by air, train, bus or car, there’s an option to suit all budgets and preferences.

Read this guide and plan your perfect itinerary to Barcelona and Alicante and don’t forget to check out my my detailed post on all the best tips and tricks for first time travellers to beautiful Barcelona!

So, read on below to find out about the different options, schedules, journey times and more.

Pack your bags for Spain and let’s go explore!

Currently Vueling offers 4 to 5 flights from Barcelona to Alicante during weekdays starting from around 06:45 am until 19:40 pm.

On weekends flight schedules do vary with only 2 flights on Saturdays and 4 on Sundays.

When flying from Alicante to Barcelona, the frequency is the same but at different times of day.

During weekdays, flights operate between 07:00 am until the last flight departs at 20:00 pm. Similarly, weekend departures do vary too.

It would be a good idea for you to consult the updated schedules and departure times when planning out for your exact travel dates as the information mentioned above may have changed.

Considering that Vueling Airlines is a low-cost carrier, you are normally able to bag pretty decent fares. For a one-way ticket you could expect to pay as little as €30 to €40, inclusive of taxes.

Booking in advance will help in securing these cheaper fares, because dependent on availability the prices above could increase quite a bit.

I also need to point out that these cheaper, discounted air fare prices normally do not necessarily include checked luggage.

When booking your flights, be sure to check this and add luggage if required, this will come at an additional cost and can be added and paid for through the Vueling website.

You can click here to search flight availability and book your flight through Skyscanner.

Barcelona’s airport (named Barcelona El-Prat) is situated out of the centre the city. But, it is easily reachable by making use of the city’s metro / subway system (the TMB), which should take around 40 minutes.

Alternatively, you may want to also book a taxi to get from the Airport to the city centre.

It is worth knowing that cab hailing services such as Uber do not operate in Barcelona.

Stricter laws that were instituted by the Catalonian government forced these service providers out although Cabify managed to find a workaround and does operate today.

This said, most locals and regular travellers alike, actually prefer to make use of the standard taxi services which operate throughout the city.

There’s an app you can downlow (AppTaxi app) which will provide you with an estimated cost / route calculator that will enable you to check beforehand on the price you can expect to pay.

The Alicante-Elche airport is also located outside of the city, but only about 9 kilometres out.

The easiest way to get from the airport to the city centre when using public transport would be to catch the C6 bus line that connects the airport and city.

For more information on the Airport – visit the Alicante airport website here.

If you prefer to rather make use of other forms of public transport, other than flying, then the next quickest option would be to travel from Barcelona to Alicante by train.

This service operated by national rail provider Renfe will take around 4 hours 55 minutes on the faster EUROMED high-speed trains. Whereas, the much slower TALGO trains take between 5 hours 20 minutes to just under 6 hours to complete the journey.

You can expect to pay just under €30 and upwards in price for a one-way ticket on this train route and these are normally bookable directly on the Renfe website.

Unfortunately, Renfe doesn’t allow you to book too far in advance. So, if you don’t see availability for your dates, then be sure to check back closer to your departure.

I love using Omio to compare trains, buses, and flights all at the same time. You can view and book through Omio as well, saving you loads of time in planning your trip!

Departures on the train from Barcelona to Alicante run between 07:00 am until 18:00 pm on weekdays and Saturdays with 9 daily departures in total.

On Sundays trains operate between 09:00 am up to 17:00 pm with fewer departures.

Of course, these train schedules & times may change and vary over time, so I would highly recommend that you check the Renfe website for updated times when you are ready to book.

Upon the return, the train from Alicante to Barcelona also operates around 9 departures on weekdays and Saturdays, between the hours of 06:45 am to 18:38 pm.

When travelling on the direct trains (with no connections) the service departs from and arrives into Barcelona’s Sants railway station.

The Sants Estació train station is connected to the Barcelona metro system on both the blue (L5) and the green (L3) lines (with the metro stops of the same name).

Alternatively, you can also make us of buses or taxis to get to and from the station in order to get to your exact destination within the city.

Arriving into Alicante you will do so at the city’s main railway station named the Alacant Terminal in Avenida Salamanca.

The Alicant railway station is located quite centrally and connected to the city through public transport options, such as the buses, the trams as well as taxi services.

All of which are within close proximity of the station.

Journey Duration: Between 7 Hours 15 minutes to over 9 Hours

Last but not least, in terms of public transport options, would be to travel from Barcelona to Alicante by bus, although this takes the longest by far.

The coach service which is operated by bus company ALSA, takes around 7 hours 15 minutes on the quickest bus that makes 2 stops along the way.

On the other hand, the longest service making 9 stops in total and completes the journey in 9 hours 45 minutes.

As such, travelling by bus is probably the least appealing. Given that one-way ticket prices range from €19.15 to over €50 you may very well be better off flying or traveling by train instead.

Either way, if you still want to make use of the bus service, then you can certainly do so by consulting up to date schedules and booking online through the Omio site.

Bus from Barcelona to Alicante

The Barcelona Alicante bus service operates around 12 departures on weekdays and Saturdays.

Departures start from 07:00 am in the morning up until 22:00 pm at night. There are also two additional night buses that depart after midnight.

On Sundays there are only 10 departures between 07:00 am until the last departure at 22:00 pm. There are no departures after midnight on Sundays.

When travelling back on the Alicante Barcelona bus service, you will also find 12 weekday and Saturday departures.

Sunday departure times may again vary. As such, it’s best to consult the Omio website when you are planning for your specific travel dates, in order to verify timing.

In Barcelona the ALSA buses depart from either Barcelona’s Sants station, the Barcelona Estación Nord or from Barcelona’s Airport (Terminal 1).

All of these bus stations are connected to, or located nearby to a Barcelona metro stop.

In Alicante the main bus terminal where the ALSA buses arrive into or depart from is the Estació D’autobusos D’Alacant, situated in Muelle de Poniente.

The bus terminal is located quite central to the city, so getting to and from shouldn’t be any hassle at all.

When booking and confirming your bus ticket, do make sure to confirm the exact departure and arrival address. This should be clearly marked on your actual bus ticket / confirmation from ALSA.

Driving from Barcelona to Alicante by Car

Journey Duration: Quickest direct route – just over 5 Hours If you are wanting to explore further afield and travel throughout Spain by car, then driving between Barcelona and Alicante on the quickest, and most direct route should take just over 5 hours.

As previously mentioned, the distance from Barcelona to Alicante is over 500 kilometres (roughly 536 kilometres to be exact), when travelling on the motorway via the AP-7 highway.

Spanish Tolled Highways I have to also make you aware that the AP-7 highway is in fact a tolled road. In Spain you will find both free and tolled motorways.

To assist you in distinguishing between these, check out the following Spanish motorway map that I located online. It’s a very helpful map that clearly indicates which roads you can expect to be tolled versus which are free. It may be very hand to print this out and keep it on hand, especially if you are completing a road trip throughout Spain, as you will need to factor toll-fees into your overall travel budget.

Renting a car: Still need to book your rental car for your trip? Having used the comparative site RentalCars.com before, I’d be happy to recommend booking through their website – RentalCars.com. There you are able to view a range of rates, availability and provider terms from various car rental agencies based on your search criteria and dates, as well as book directly on the website too.

Where to Stay in Alicante or Barcelona

Do you still need to find a place to stay for your next Spanish getaway?

Some great choices of  hotels that are centrally located in Alicante include the Eurostars Mediterranea Plaza, the Melia Alicante, or the luxurious 5* Hospes Amérigo hotel.

Alternatively, you can also browse through Booking.com.

Here you’ll be able to view an array of different accommodation options for both Alicante and Barcelona.

If you prefer to have your own space over staying in a hotel, then you may want to Browse for Airbnb options in Barcelona here, or in Alicante here.

What to do in Alicante or Barcelona

With so many awesome things to do in Alicante, as well as Barcelona, you’ll no doubt have a wonderful time visiting either of these two Spanish destinations.

Whenever I visit a new city or place I haven’t been to yet, I always love to check out different unique tours or activities that I may want to book.

If you are the same, then why not check out the links below for experiences, activities and tours that you can add to your travel itinerary in either Barcelona or Alicante.

Be sure to also read up on all my suggestions for brilliant things to do in Barcelona at night too!

Click here for tours in Barcelona or here for activities and tours in Alicante.

Have you travelled on this journey before?

If so, I’d love to hear your thoughts on what you think the best way to travel from Alicante to Barcelona (and vice versa) is.

If I have missed any pertinent information, or if you have any other insider tips and suggestions that you would like to share, then feel free to do so in the comments section down below. 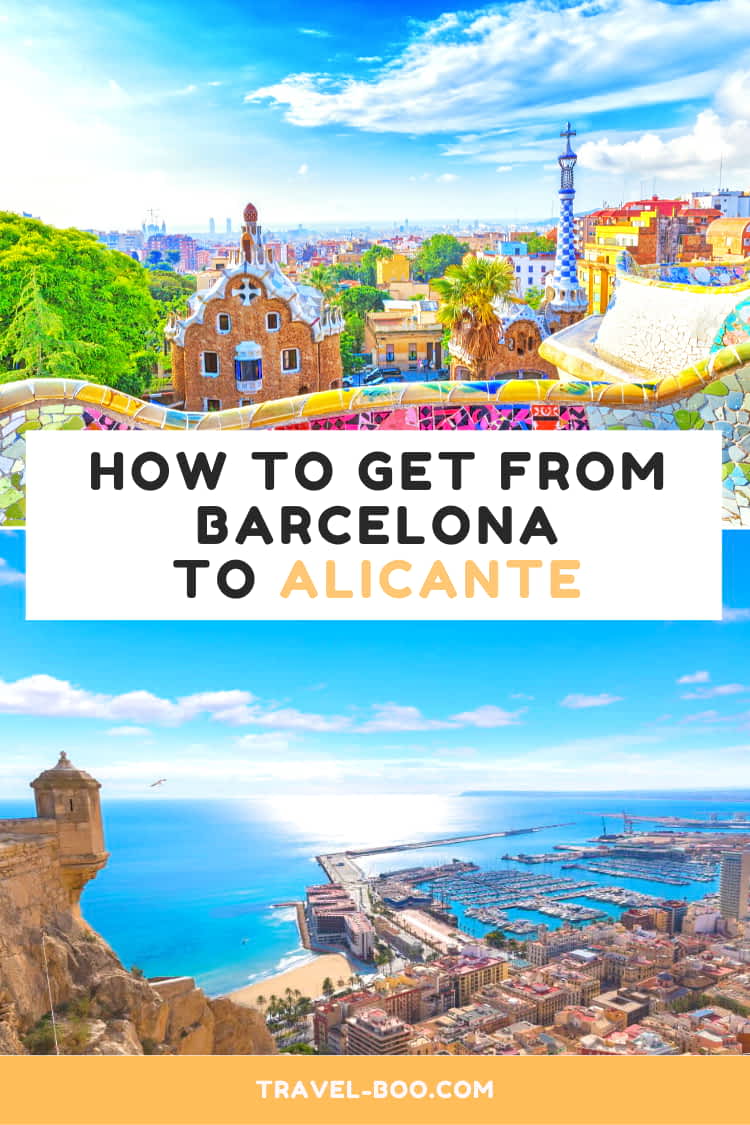 How to get from Seville to Cordoba

Travelling from Barcelona to Zaragoza