Malaga, situated on the Costa del Sol in southern Spain, as well as Barcelona, the vibrant  Catalonian capital situated in the north east, are both wildly popular holiday destinations and a good consideration for any would-be travellers wanting to visit Spain.

Although Spain is quite a large country and the distance from Malaga to Barcelona is around 1000 kilometres apart, it’s still pretty feasible to consider combining these two locations into your itinerary. This is in large part thanks to Spain’s well establish public transport links, enabling you to really dig in and explore the length and breadth of the country.

So, whether you are starting off in Catalonia and need to travel from Barcelona to Malaga or vice versa, this guide is for you. Below I will give you the full breakdown on how to travel from Malaga to Barcelona through the various modes of transport available, whether by air, train, bus or car.

Flights from Malaga to Barcelona

Airlines such as Vueling and RyanAir operate several scheduled flights per day between the two cities with fares normally being very reasonable. You can usually snag some great deals and expect to pay well under €100 one-way for a Malaga to Barcelona flight (and vice versa on the return). In fact, you could easily bag a ticket at only €30 – €35 one-way.

It’s worth noting that Iberia Airlines also sell this route on their site, but they actually operate this route in partnership with low cost carrier Vueling, which is also part of the same group of companies as Iberia.

Top Tip: Be sure to check the checked luggage allowance. As is the case with many airlines these days and especially since both Vueling and RyanAir are low cost airlines, often the cheaper fares do not include checked luggage and do have strict hand luggage limits too. If you’re connecting from an international destination and booked your tickets separately, be sure to verify this and add on checked luggage if required.

Barcelona El-Prat Airport: Barcelona’s Airport is situated a bit further out of the city but with good metro / underground connections to central Barcelona. From the Airport it should take around 35 mins to get to the city centre, depending on your location and where you’d be staying.

All things considered, travelling by air from Malaga to Barcelona is the preferred option for most travellers. In saying this, it is worth taking into consideration the time needed to get to and from both airports, pre-flight check-in, security clearance and then the actual flying time.

So, in doing the calculations, it’s probably safe to assume that total journey time in reality is more likely to be in the region of around 3h30 – 4h00 long time frame. Nevertheless, this is still the fastest way to get to Barcelona from Malaga.

Malaga to Barcelona by Train

If for whatever reason you prefer not to travel by air, then the next quickest route to consider would be to take the train from Malaga to Barcelona. Located around 1.5 kilometres from the city centre, the Malaga Maria Zambrano station is where the RENFRE train service would depart from in Malaga. Arriving at Barcelona Sants station, it’s operated on the AVE Renfre train service which is Spains high-speed rail service connecting various destinations throughout the country.

When booking tickets (which can be done directly on the RENFRE site or on other sites such as Trainline or even Omnio to name a few), it is very important to check whether connections are needed.

Ticket prices range in the region of around €60 for standard class or €80 for first class, subject to availability. It’s definitely advisable to book in advance as these fares do increase based on availability.

Very Important: There is only about one or two departures on the Malaga to Barcelona train service that don’t require any changeovers and this journey will last around 5 hours 50 minutes. If you happen to book a train that does require a changeover then you could end up spending around 6h30 – 7h30 in journey time travelling between the two cities.

Malaga to Barcelona by Bus

Although, as an alternative option, you could consider taking the Malaga to Barcelona bus operated by the coach company ALSA, in my view this should be an absolute last resort. I say this purely because of the long journey duration with travel time ranging between 15 hours to 16 hours 45 minutes, depending on the bus you book and the number of stops it makes on route.

If this is the only option available to you or you prefer taking the Malaga to Barcelona bus, then you could consult the ALSA site and book tickets online. Ticket prices range from around €30 upward, depending on availability and the service / time you wish to book.

From Malaga the bus services depart from the Malaga bus terminal which is also located at the Malaga Maria Zambrano train station, so it’s around 1.5 kilometres from the actual city centre.

Arriving into Barcelona, most of the buses head to Barcelona’s Nord bus station, although there may be one or two that end at Barcelona’s El-Prat Airport too.

Malaga to Barcelona by Car

Journey Duration: Between 9 to 10 hours when driving direct. If you happen to have more time on your hands and want to experience and explore more of Spain, visiting different towns and cities along the way then driving from Malaga to Barcelona by car is definitely an option to consider. Whether you want to travel more inland connecting through Granada or along the coast via Alicante and then upwards through Valencia, a road trip along this stretch will be a stunning way to see parts of Spain you may otherwise completely pass by or miss out on. As already mentioned, the distance from Barcelona to Malaga is roughly 1000 kilometres, or slightly more, depending on the route you decide to take. If you’re looking to hire a car then check here for rates & availability through Rentalcars.com. We’ve used this service before and found it to be both easy to use and great price wise as they compare various different car rental companies based on your search criteria. Spanish Motorways In Spain there are both free motorways and tolled motorways. Generally speaking, the free highways are normally denoted by an A followed by a number, example the A4 motorway. Then you have the tolled roads that usually start with AP and a number, example the AP7 that runs from Valencia up towards Barcelona. There are certain stretches where it may be possible to travel on an alternate motorway to an AP motorway in order to avoid those tolls. The best option would be to make use of a GPS or to research your travel route in advance. The following link may help you better understand the various toll fees applicable to your route – Spain toll fees map.

Where to Stay in Barcelona & Malaga:

Are you still planning your trip and need to book a place to stay? Then click on the links below to view rates, ratings and availability for accommodation in either Malaga or to add to your Barcelona, Spain Itinerary, using Booking.com.

If you are wanting to complete your trip by adding on unique experiences, tours or activities then why not click on the below links to view availability & rates for a whole range of different activities that you can do in both Malaga or Barcelona.

Looking to spice up your evenings in Barcelona? Don’t miss our top suggestions of fun things do do at night in Barcelona.

If you’re visiting Spain, then as you can see from this guide, getting from Malaga to Barcelona should be a breeze. There are so many different options available depending on your preferences, available time as well as what you want to see & experience when visiting.

If you’ve already been to Spain and completed this route, then I’d love to hear any tips, suggestions or feedback you may have to add on.

Feel free to comment below or to share this guide if you have found it useful and informative. 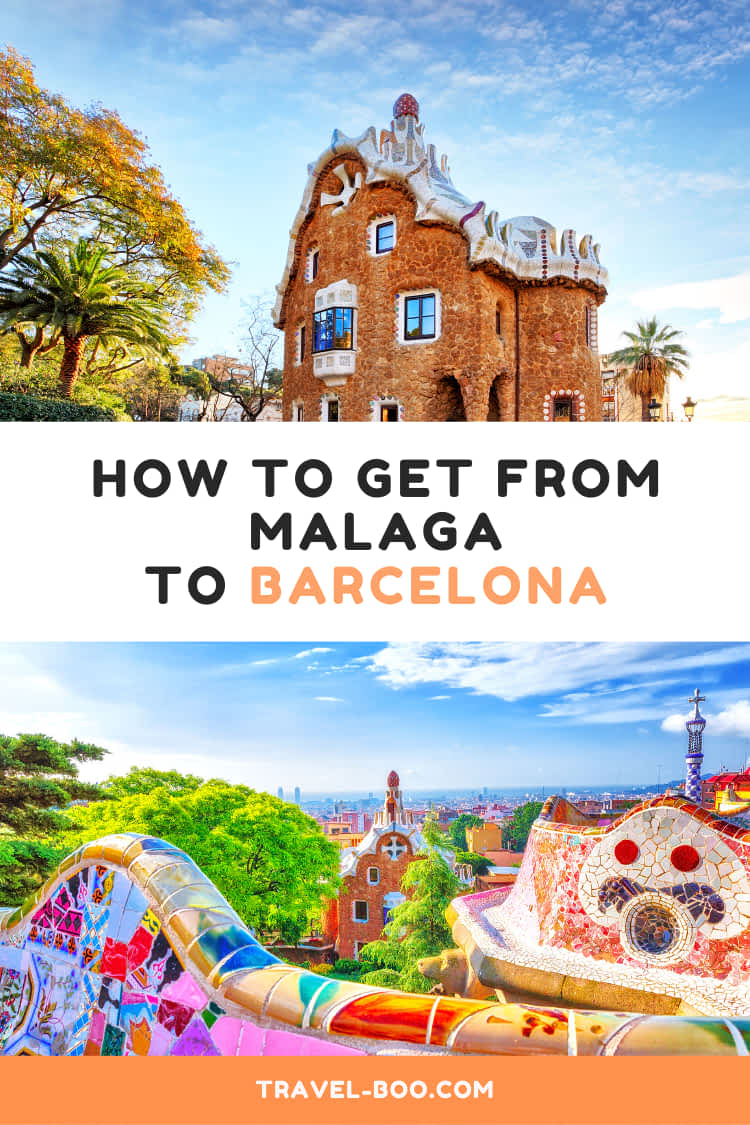 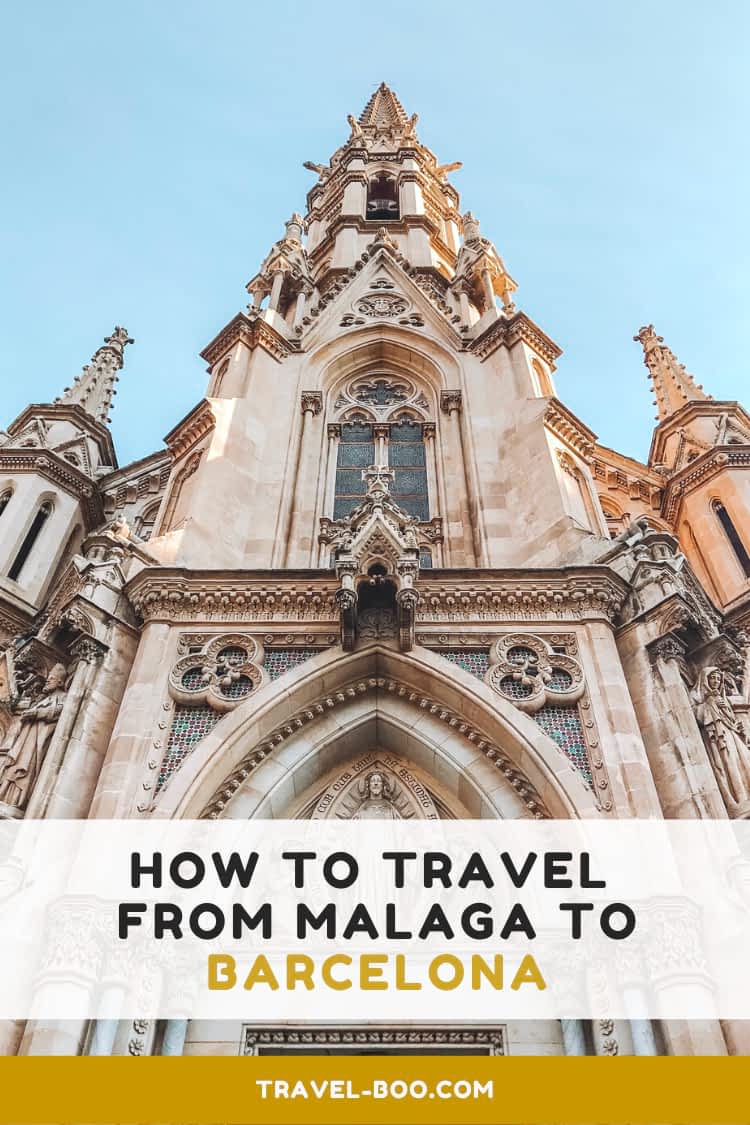 Travelling from Malaga to Granada 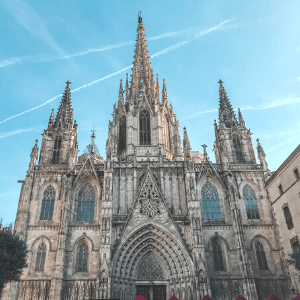