Getting from Malaga to Granada Travel Guide

Granada’s big draw card is without a doubt the famous Alhambra, but this ancient city, once a Moorish capital, truly has so much more to offer any visitor.

With its fascinating past, incredible Moorish / Arabic architectural influences and set against the gorgeous Sierra Nevada mountains, it is no wonder that Granada is such a popular Andalusia destination.

If you’re travelling throughout the region and arriving into Malaga and thinking of heading onwards to Granada as your next stop, then you may well be wondering just how to travel from Malaga to Granada.

Fear not! In this guide, I provide you with a detailed overview of all the available modes of transport, whether by train, bus, car, taxi or transfer.

First and foremost, when travelling from Malaga to Granada on public transport, the quickest, cheapest and most convenient would be to do so by bus.

With several bus departures daily and a journey time that ranges between 1h30 to 2h30, as well as ticket prices between €5.45 to €14.08, travelling from Malaga to Granada by bus certainly ticks all the boxes.

This particular bus route is operated by the coach company ALSA, through who’s website you can also consult the bus schedules and book your tickets online.

There are plenty of Malaga to Granada bus departures daily, both from the city centre as well as directly from the airport too.

Departures start from as early as 07:00 am in the morning with the last bus departing at around 21:30 pm with almost hourly departures in between.

Equally, upon the return you will find a good frequency of buses from Granada, starting as early as 05:30 am up until 21:00 pm at night.

It is worth noting that from Granada the buses only depart from the actual bus station, and not the airport.

If you are planning to connect onward to Granada Airport then a change of coach would be needed to get to the airport.

It is not far out of the city centre with the metro station, El Perchel and the main train station, Maria Zambrano located a short walk away.

When you log onto the ALSA site and input your search criteria, the results page will return various options available for you to book.

There you will also find an option to view the ‘Itinerary’. When you then click on each location name, it will show you the exact location & address of each bus terminal.

Important – Important to note, is that ALSA also operate a host of other routes, some which depart from a different bus stop located in Avenida Manuel Augustin Heredia.

Thus, be sure that you are heading to the correct bus terminal.

Granada Bus Station – When arriving into or departing from Granada to Malaga by bus, you would arrive and depart from the Granada Estación de Autobús (Address – Av. de Juan Pablo II, 33, 18014 Granada, Spain).

The bus station is located a little way out of the main centre of Granada and is reachable by bus, tram or taxi, which should take between 15 – 20 minutes.

There is also a taxi rank right outside the bus station too.

Malaga to Granada by Train

Although travel by train from Malaga to Granada is another option that will take around 1 hour 30 minutes to 1 hour 40, it does in fact require a change of trains with no direct services running.

Operated on the AVANT and AVE high-speed rail service, the changeover plus higher ticket prices mean that the bus journey would likely still work out better in the end.

The Malaga to Granada train service is operated by the Spanish national rail provider Renfe, and currently only offering two weekday and 1 weekend departures.

One-way tickets generally fetch from €27.30 upwards in price. Usually cheaper if booking in advance (although you can only book around 2 months in advance on the Renfe site).

Departures out of Malaga will be from the main train station, the Maria Zambrano railway station, that is situated around 2 kilometres outside the Malaga city centre.

Granada’s train station is situated closer to the city centre than the bus terminal is. Located in Av. de Andaluces, 18014 Granada, you can travel by either taxi, bus or metro (tram) into the city depending on where you need to go. The closest tram stop being the Estación Ferrocarril.

Driving from Malaga to Granada by Car

Journey Duration: Approximately 1 hour 40 minutes The distance from Malaga to Granada ranges roughly between 133 – 150 kilometres, meaning that total driving time should be around 1 hour 40 minutes. As such, the decision to rent a car and drive from Malaga to Granada is another option to consider. It will no doubt allow you more freedom to explore at your own leisure and experience parts of Andalusia that you may miss out on if restricted by public transport. The quickest route would be drive via the A-92 highway which travels more inland. Although, you may also opt to travel along the coastline and then travel further up and inland, but this would most definitely add on more time and kilometres to your journey. Spanish Motorways When travelling by car in Spain, you will find both free and tolled highways. As a quick reference, usually free roads are indicated as an A followed by a number – example A-7, whereas the tolled roads are an AP and a number, example AP-46. I actually found this very useful Spanish road network map online that gives an indication as to which roads are tolled versus free highways. Renting a car If you are interested in renting a car for your next Spanish trip, then have a look at RentalCars.com for rates & availability. I’ve used them before for rentals and found it to be fairly easy and a good comparison site that compares various different rental agencies’ rates in one spot. Booking online through their site is also quite simple and straight forward, I found.

If you are flying into Malaga and planning a direct onward journey to Granada, then you may be wondering if you are able to catch any of the above-mentioned options straight from Malaga Airport.

Below I will outline exactly which services do depart directly from Malaga’s Costa Del Sol Airport to Granada.

Bus from Malaga Airport to Granada:

As mentioned, the coach service on ALSA do offer direct departures to Granada from Malaga’s Airport.

When searching online on the ALSA website, you can specify your departure as being Malaga Airport and the search results will then return all available departure times accordingly.

There are in fact several daily departures starting from around 08:00 am up until about 20:45 pm at night.

The journey times range between 2 hours to 2 and a half hours depending on the bus booked. One-way ticket prices start from €11.75 and upward.

Train from Malaga Airport to Granada:

When it comes to the train services operating between these two cities, unfortunately there are no direct links from Malaga or Granada’s airports.

In stead you would need to make your way into the city to the relevant train station in order to travel by rail on this route.

Taxi from Malaga Airport to Granada:

Are you thinking of possibly ordering a taxi from Malaga to Granada?

Whilst this could be another option to travel by, it will also work out quite costly given the distance between these the two cities.

If you go by Taxi-Union’s suggested tariffs, a Malaga to Granada taxi trip could cost anywhere between €173 to €205 (or more).

Tip: If you are still genuinely interested in this option, then go read up on the Malaga Airport transport page which provides further information and important tips for travelling by taxi from Malaga Airport.

Lastly, you could also pre-book your own private Malaga to Granada transfer service.

Many travellers prefer this option as they can rest assure that their driver will be waiting for them in the arrival hall at Malaga Airport and then transfer them to their onward destination.

In this case, I would happily recommend that you consider booking through Welcome Pickups who currently quote around €185 for this trip (depending on where exactly you are travelling to in Granada).

You can view up to date rates and book directly on the Welcome Pickups website here.

Where to stay & What to do in Granada

If you have already completed this journey, then I’d love to hear about your experience and any other tips & suggestions you think may be useful.

Feel free to comment in the comments section below and share your thoughts on the best way to get between these two Andalusia destinations. 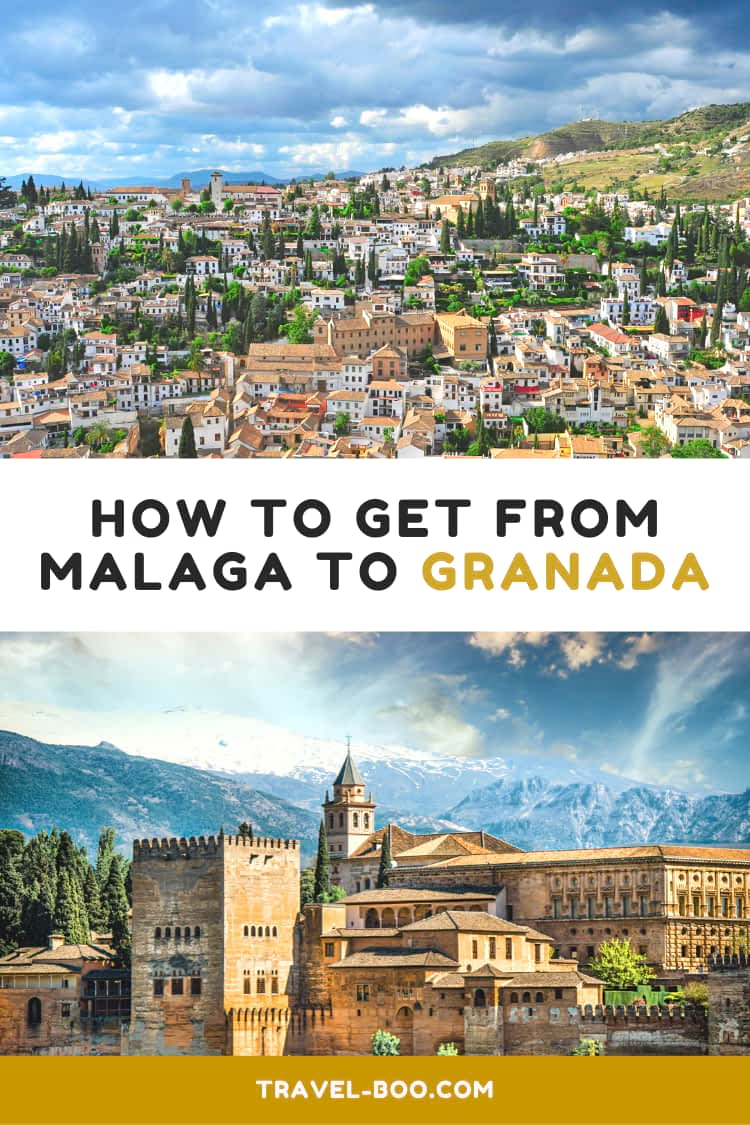 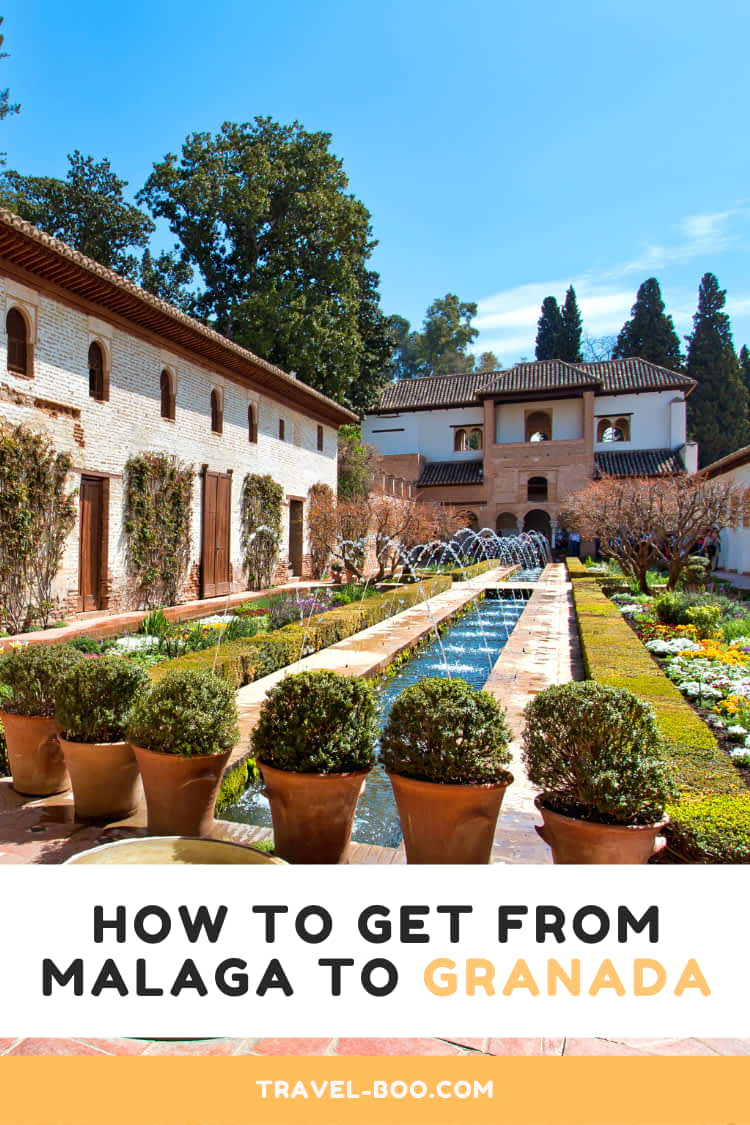 How to get from Malaga to Barcelona