With a history dating back thousands of years and with the official establishment of the Kingdom of Portugal in the 12th century, present day Portugal (now a Republic) has a rich and colourful past.

Today, this is evident in not only the medieval villages, towns and architecture but also in the incredible array of famous landmarks in Portugal, both natural and man-made.

That’s why I’ve decided to collate a list of quintessential and iconic landmarks in Portugal that you should check out on your next Portugal vacation!

Before you go, be sure to plan & book your Portugal Travel Essentials:

Pssst…Don’t forget to read our Portugal packing list post to ensure you’ve got all your travel essentials packed and ready for your holiday to Portugal!

Read our post on the 10 best cameras for bloggers, vloggers, and travellers alike and get ready to snap away at those memorable travel moments! 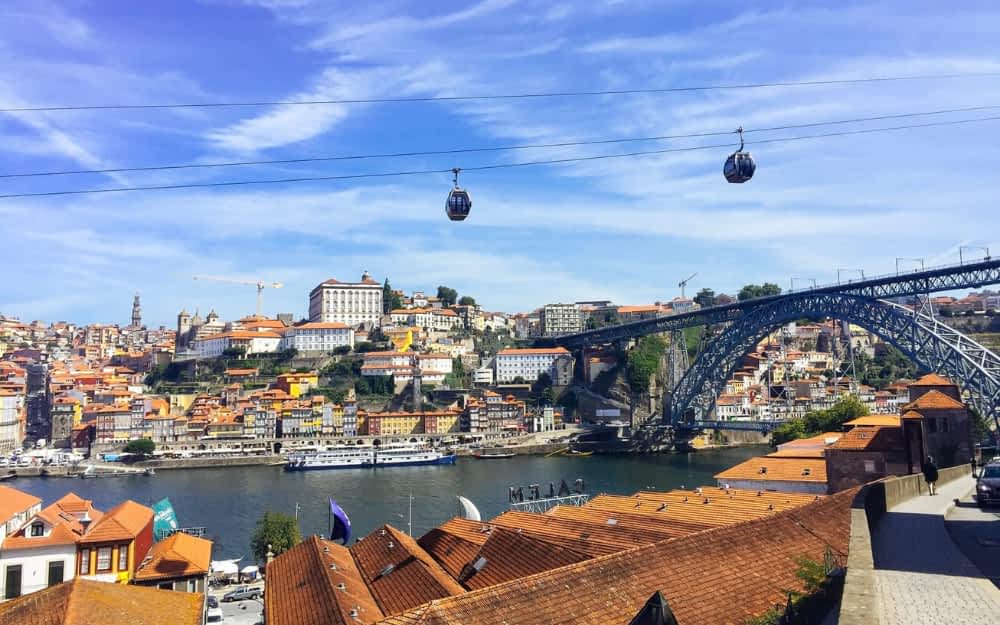 The Dom Luis Bridge is a double-deck metal bridge located in the northern city of Porto. It crosses over the River Douro and connects the Port wine cellars of the Vila Nova de Gaia neighbourhood with the lively Ribeira neighbourhood.

The bridge was built in the late 19th century. It features two levels, with a large arch in the middle. Both levels have pedestrian walk-ways, but the top-level offers stunning views 60 meters above the river and the city. This is also the level that the tram rides over when crossing between the city sections. 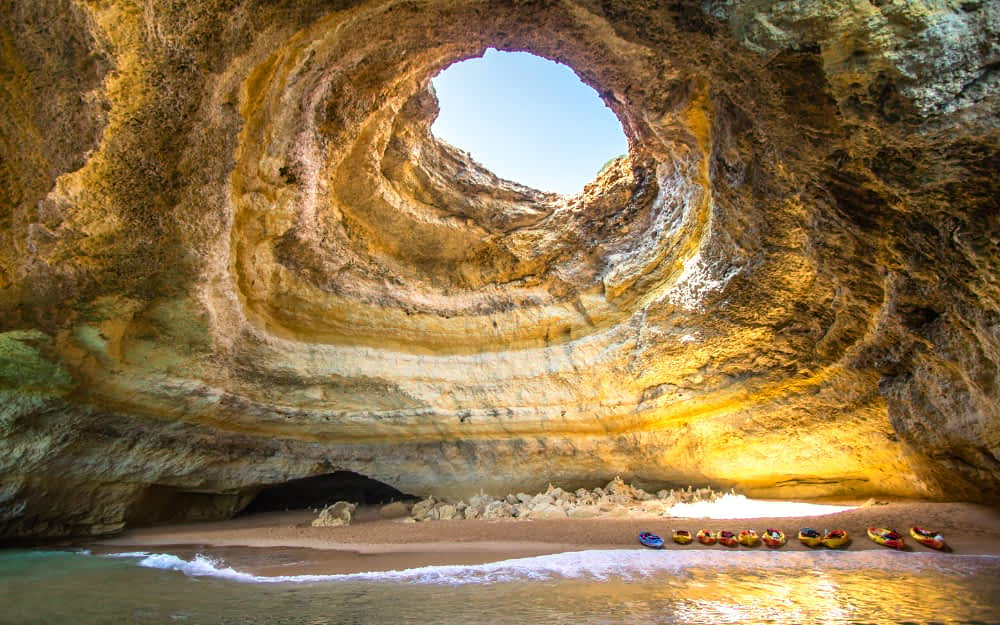 The Algarve region is known for gorgeous beaches, dramatic coastlines, cliffs and caves.

The Benagil Sea Cave is a beautiful Portugal landmark that isn’t man-made. This natural rock formation is located near the town of Algarve. It’s one of the most unique sea caves found anywhere in the world.

It has a distinctive hole on the top that allows the sun to shine in and onto the sandy beach area inside the cave. You can reach the top of the cave on foot. However, a Benagil Sea Cave boat tour is the only way to reach inside the caves. 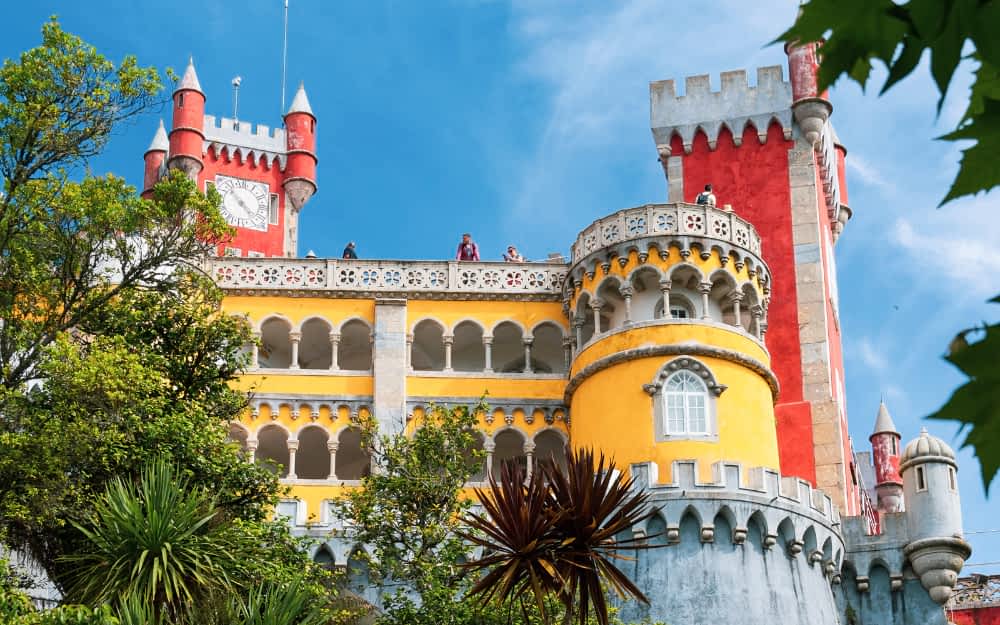 Pena Palace is one of the most colourful Portugal landmarks. This 19th-century Romanticist castle is painted a vibrant yellow and red. It’s perched on a hill in the lush Sintra Mountains and contrasts beautifully with the forested landscape.

The site where the castle rests previously held the ruins of an old monastery. King Ferdinand transformed the remains into a fairy-tale-like palace between 1842 and 1854 to serve as a summer residence for the Portuguese royal family. Ferdinand and his wife, Queen Maria II, had a direct say in the castle decoration and symbolism.

This is one of the most quirky historical places in Portugal. Touring Pena Palace, and in fact visiting the village of Sintra from Lisbon is an experience you don’t want to miss.

The Belém Tower is one of the most striking Lisbon, Portugal landmarks. It was built using lioz limestone between 1514 and 1519. It served as a fortress to defend the city from attack. It was also the first and last thing sailors would see from their country when taking voyages. For this reason, it became a symbol of their homeland.

The tower enjoys a picturesque location on the banks of the Tagus River and is isolated from the mainland by a single bridge. Visitors can climb the spiral staircase to the top of the tower and take in the beautiful views of the city and the river. This landmark is a must-see on any Lisbon itinerary. 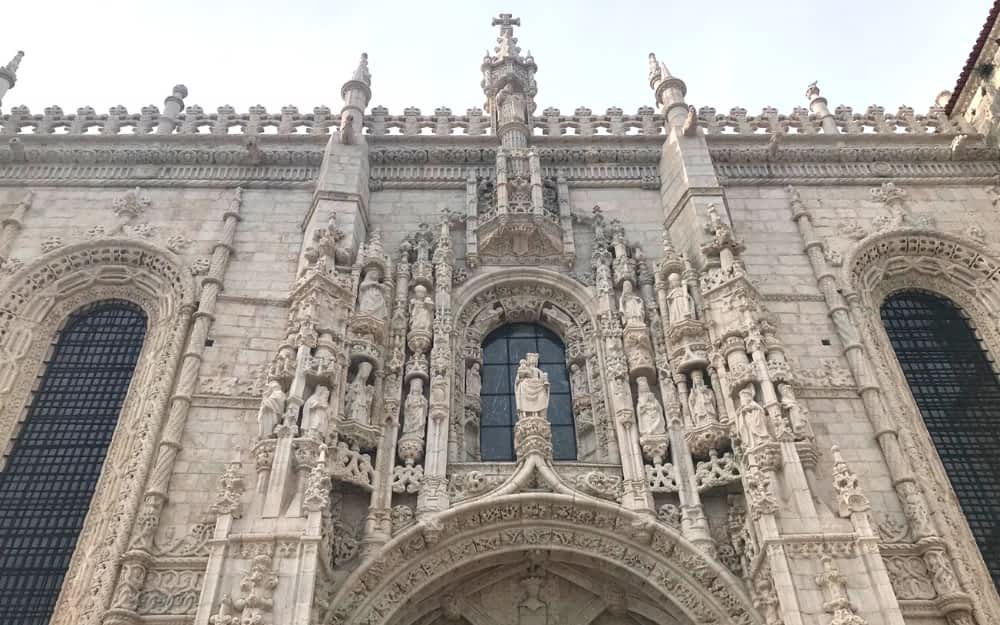 The Jerónimos Monastery is another one of Portugal’s famous landmarks. Construction for the monastery began in 1501 and wasn’t completed for another 100 years. It’s a beautiful example of the Portuguese late Gothic architecture style.

The Hieronymite monks originally lived and worshipped in the monastery. Later, it became the final resting place for members of the Portuguese royal family.

This large building is appreciated for its ornate carvings and decorations. Especially eye-catching are the richly detailed columns carved with maritime symbols and the unique double story cloister design. 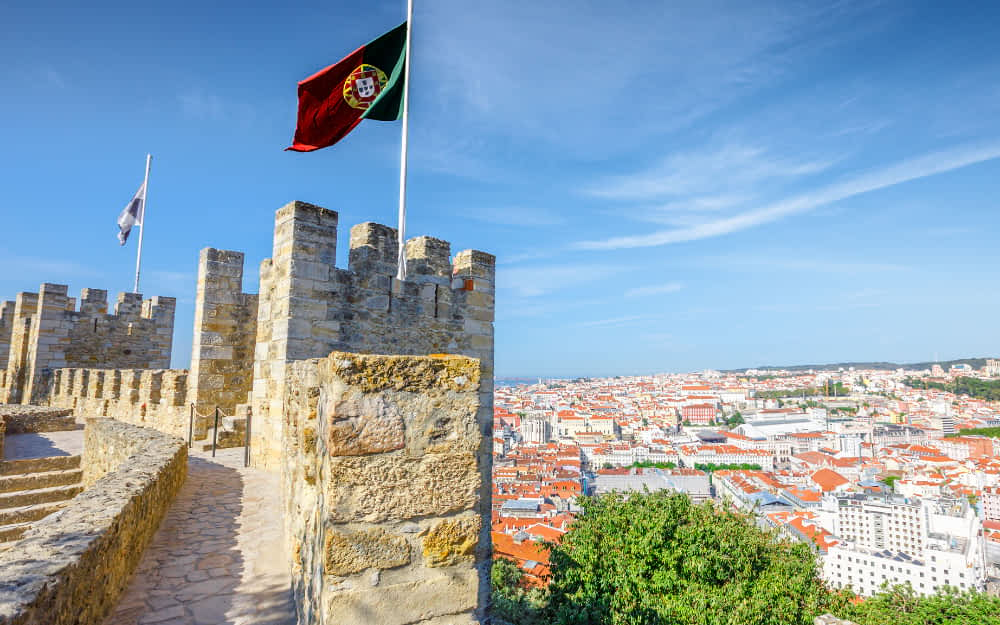 The São Jorge Castle historic landmark in Portugal is an 11th-century medieval fortress built during the Moorish period.

The castle’s original purpose was to house military troops, and in the event of an attack, to shelter the elite. It wasn’t until the 12th-century that the castle began being used as an official royal residence.

Today, it’s one of the most important historical sites in Portugal. Visitors can tour the castle and admire the ancient architecture and modern exhibitions. Several of the castle towers are also accessible; each feature astonishing views of the city and sea. The ground’s elaborate gardens and an underground archaeology museum are also open to the public. 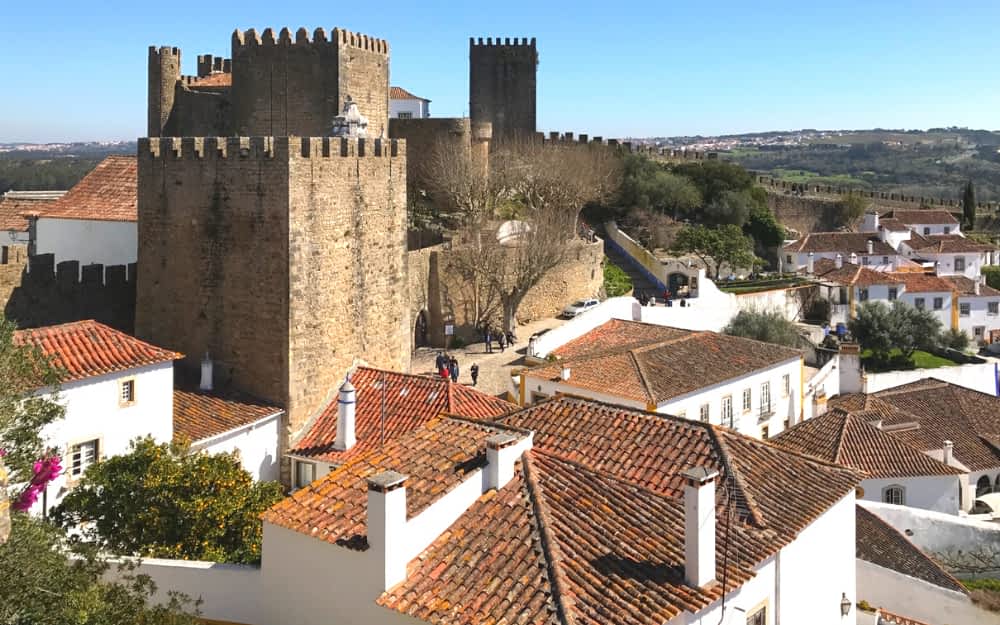 Óbidos Castle is a well-preserved medieval castle that dates back to the 8th century and a prime example of medieval landmarks in Portugal. It resides in the small historic town of Óbidos, in eastern Portugal. The castle walls surround most of Óbidos’s quaint old city.

Today, the castle operates as a heritage hotel, and the only way to see the inside is to book a room and spend the night. The interior is refurbished but retains a style reminiscent of ancient times.

Visitors can freely access the battlements and the perimeter of the castle walls. The west wall offers stunning views of the town and the countryside’s beautiful vineyards. 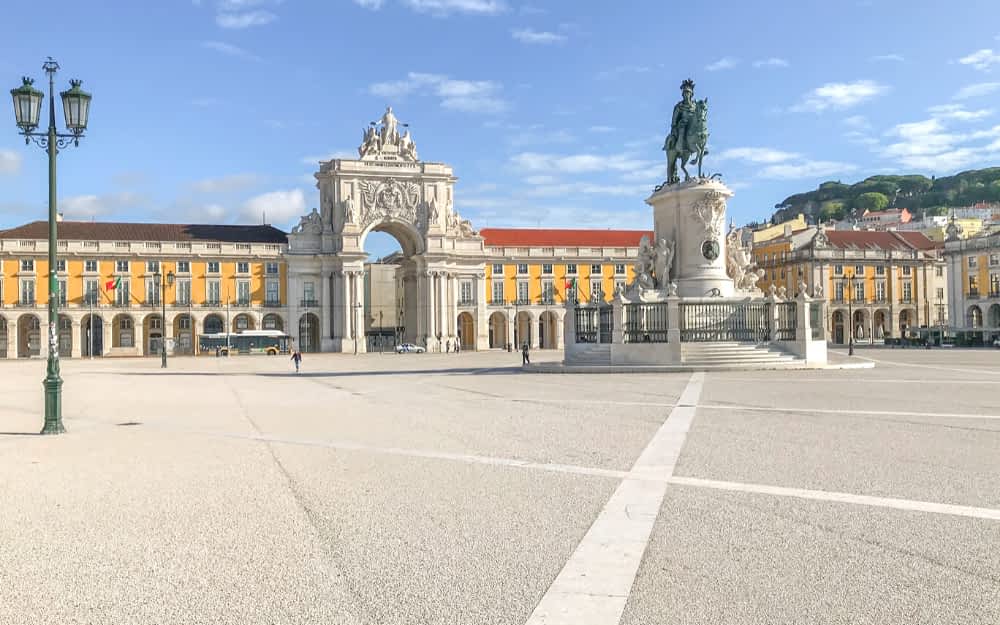 Praça do Comércio (Square of Commerce) is another one of Lisbon’s landmarks noted for its stunning architecture. The impressive plaza is enclosed on three sides by distinguishing yellow Pombaline style buildings. A large statue dedicated to King Joseph I stands in the centre.

The Arco da Rua Augusta (Rua Augusta Arch) occupies the entrance of the square. There is a viewing platform at the top of the arch that towers 30 metres high. It offers panoramic views of the Baixa district of Lisbon. The entrance fee is €2.50.

This is one of the biggest squares in Europe, and one of the highlights of Lisbon. The spacious square is a hive for tourist activity. It allows plenty of space for strolling and contains lots of inviting cafes to relax and enjoy a coffee. 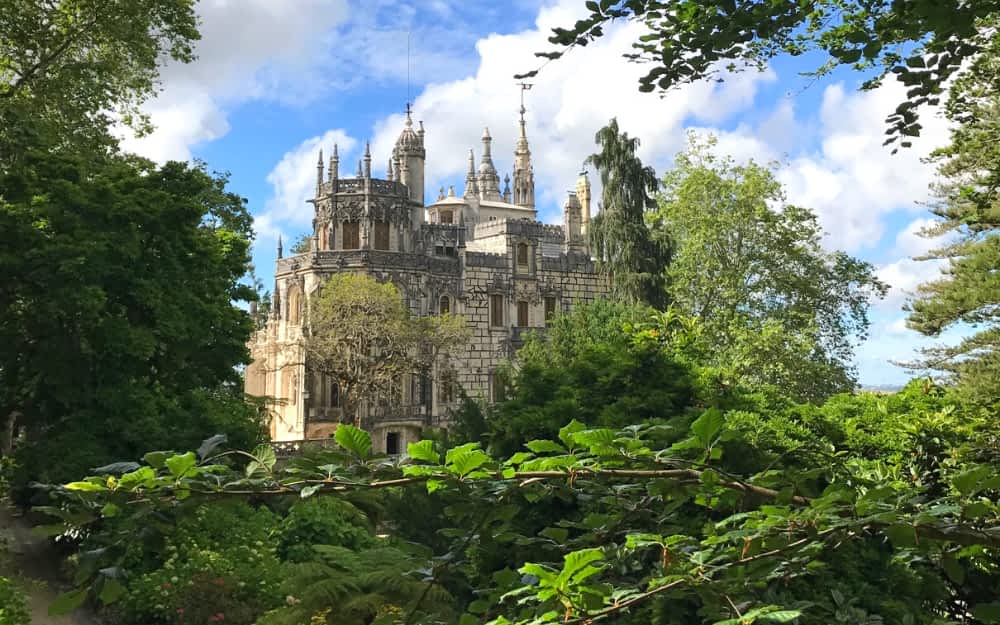 Located in the beautiful town of Sintra, Quinta da Regaleira is one of Portugal’s historical sites that truly astonishes. This 20th-century palace and chapel are unique and full of artistic beauty. The facade is characterised by an octagonal tower, Gothic pinnacles, and gargoyles.

The lavish park is just as exquisite as the castle – if not more. It contains lakes, grottoes, fountains, wells, and unusual statues referencing mysterious symbols. There is also an extensive system of underground tunnels and several initiation wells.

Quinta da Regaleira is one of the highlights of Sintra and among the most famous landmarks in Portugal. 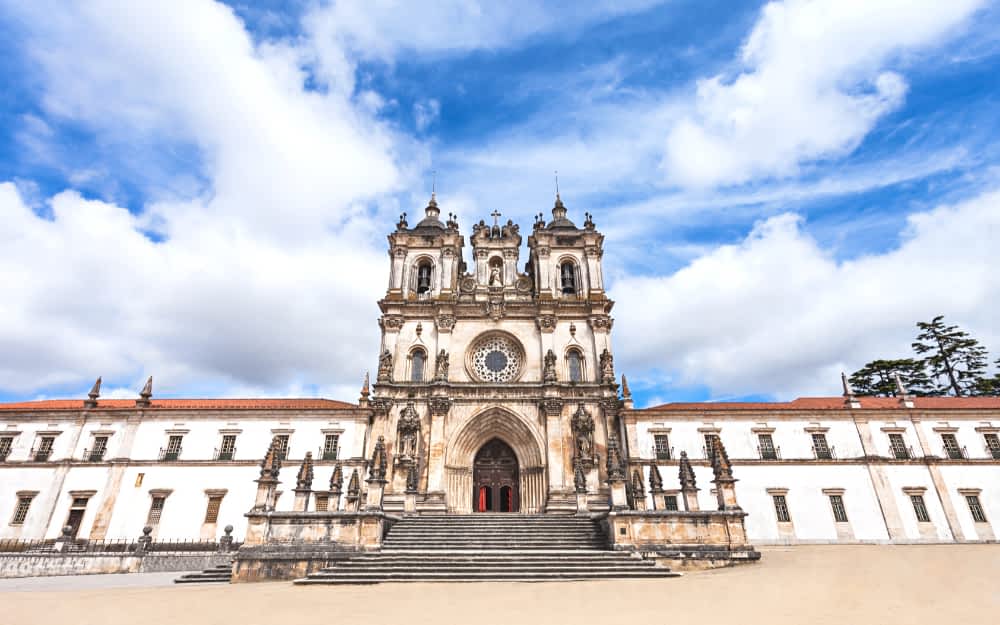 The Alcobaca Monastery is a 12th century Roman Catholic building founded by the first Portuguese king, Afonso Henriques. Located in Alcobaça, Portugal, it was the first-ever Gothic building in the country.

The facade has impressive stone detailing and features a mix of styles. The portal and the circular rose window were part of the original church. At the beginning of the 18th century, statues and the two towers were added.

As required in Cistercian churches, the interior walls and columns of the church lack any sort of decoration. There are rows of windows that give the building plenty of light. This over 800-year-old monastery is very well maintained and a true gem of Portugees architecture.

Tip: Combine a visit to Alcobaça together with Batalha and Tomar which together form what is known as the ‘Monastic Triangle of Portugal’, a great day trip from Lisbon. 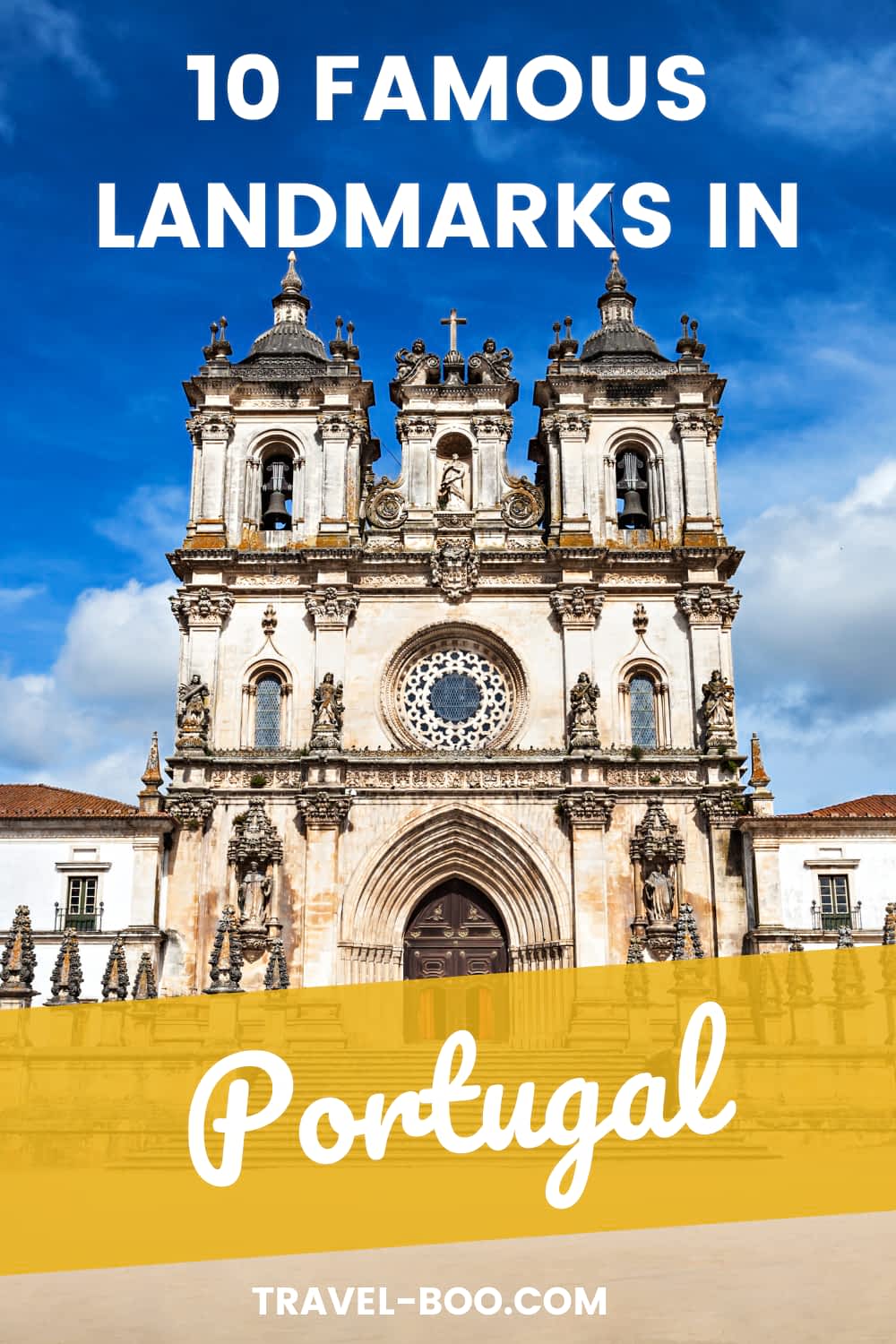 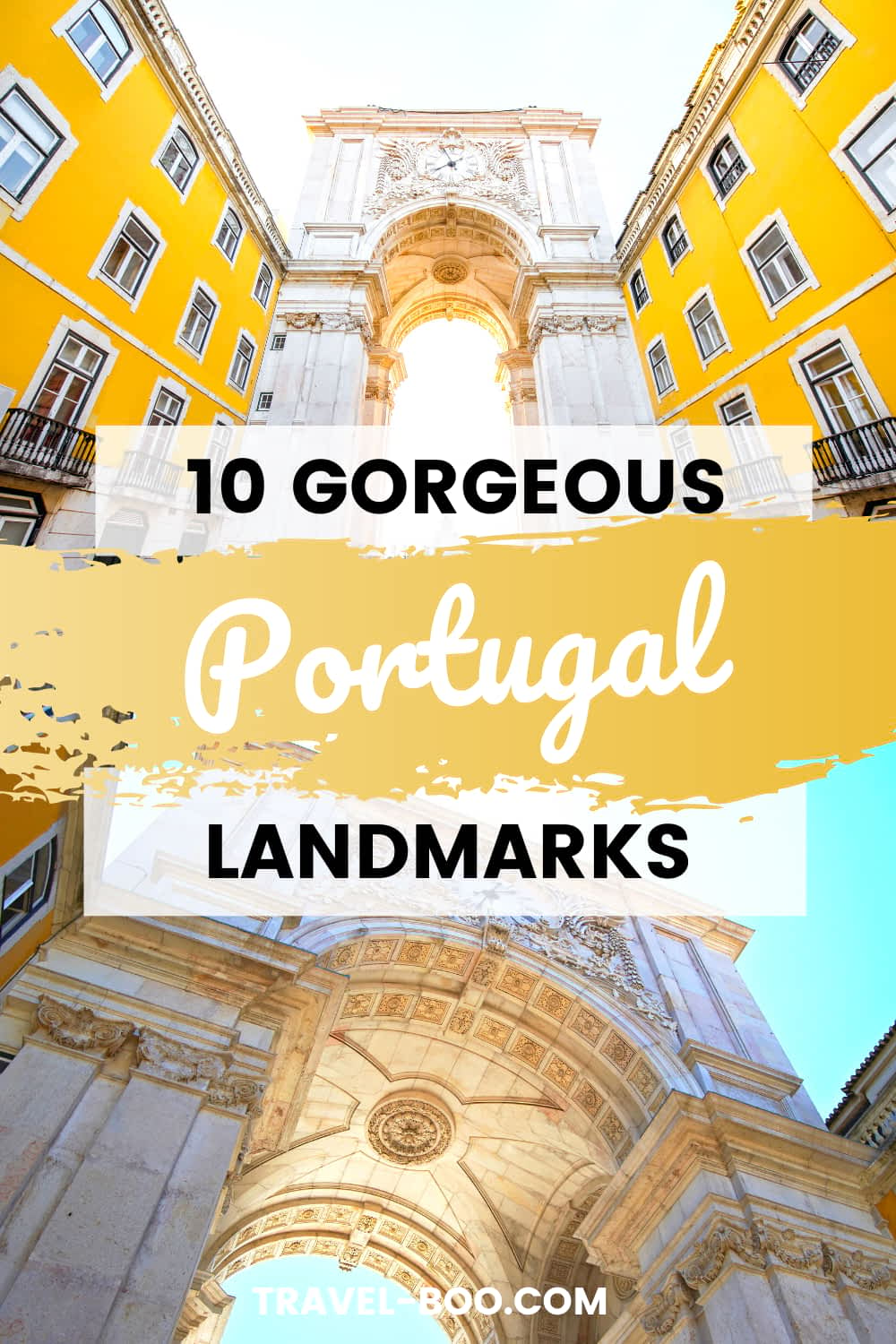