10 Most beautiful beaches in Crete, Greece

Looking for a list of the best beaches in Crete, Greece? Then look no further!

Crete is the largest of the Greek islands, with a 650-mile long coastline, that’s over a 1045 kilometres made of stunning Crete beaches, from wide-open bays to rocky coves, deserted strips of soft sand,  and pebbled shores. Some of them are remote, quiet, and relaxing, while others offer dozens of activities for a fun-packed holiday.

With an average of 300 days of sunshine every year, the hot season is quite long on the island. The best time to visit Crete and discover these amazing shores goes from late April until late October, especially for the best weather in Greece.

If you’re planning a visit to Chania or other parts of Crete, island hopping throughout Greece, then read here for the 10 best beaches to visit on Crete. Have you packed your swimming suit already? Let’s go!

Often included in several world’s best beaches lists, Elafonisi is a no-brainer pick when holidaying in Crete. Located on the southwestern coast of the island, the beach is actually an islet that is separated from the coast by a shallow lagoon. According to the currents, the lagoon can range from just a few inches to up to a meter high. More often than not you’ll find yourself able to just walk to the islet.

Elafonisi’s main trait is the long strip of pink sand that adds a spectacular touch of colour to the already exotic landscape. The soft sand is in fact populated by millions of small colourful shells that give the impression of stepping on a pink carpet next to the turquoise sea.

The beach tends to be overcrowded during the high season, quite expected of such a popular spot, but that doesn’t stop you from enjoying it as one of the top beaches in Crete, and undoubtedly one of the most romantic in Greece.

Also in the same region, and not far from Elafonisi, the wide bay of Falassarna is one of the best western beaches in Crete to practice different water sports, including water ski, windsurfing, kitesurfing and many more.

Often considered among the most popular beaches in Greece, Falassarna is actually a collection of small coves and one wide, long beach over 1 km long, all these characteristics allow visitors to feel isolated even during the peak summer months.

Soft golden sand and incredibly clear crystal waters are two of the reasons why you should visit this area. Besides, since it directly faces the West, the beach has rightfully earned the fame for having the best sunset on the island. Grab a cocktail at one of the local beach bars and enjoy the scenery as the sun sets on Falassarna!

Less than an hour away from Falassarna, Balos Beach and Lagoon are usually described as the most exotic beach in the Mediterranean. No wonder Crete is also often regarded as one of the most beautiful Greek Islands to visit!

The lagoon is on the Gramvousa peninsula, on the northwestern coast of Crete. Balos has become so famous that you have probably come across a picture of Balos already. The soothing bright colours of the lagoon contrast against the backdrop of the harsh Cretan mountains.

The beach is a tad off the beaten track, and can only be reached in two different ways. You can either catch the morning daily cruise departing from the nearby Kissamos port, or you can drive a fantastic dirt road for about 35 minutes and then hike all the way to the beach for another 20 minutes. This last option is the best way to admire the unique panoramic views of the lagoon and Cape Tigani, just opposite the beach.

Move all the way to the east of the island to discover one of the most beautiful beaches in Crete, the fantastic Vai.

The beach is better known for the magnificent palm grove that borders the strip of soft sand. Over 5000 date palm trees give life to Europe’s largest palm forest. Some rocky coves in the area make unique hideaways for those into naturism.

Despite being in a somewhat remote location, the beach of Vai is well-organized for you to find everything you need. Those looking for the best things to do in the area should definitely consider a stay in the city of Agios Nikolaos. 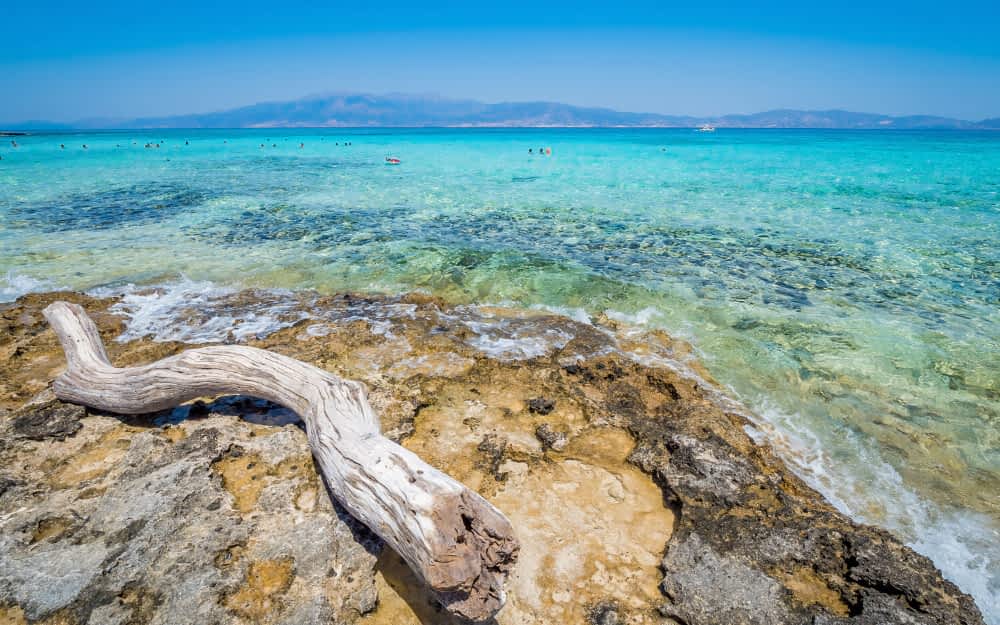 Off the southern coast of Crete, a small uninhabited island known as Chrissi Island (the local name is Gaidorounisi) is probably one of the best beaches in Crete. Wild and pristine, the small islet can be reached after a one-hour boat ride from the coastal city of Ierapetra.

The boat docks on the southern portion of Chrissi from where a quick walk amidst a protected forest of Juniper trees lands you in the prettiest beach on Chrissi, the Golden Beach.

The beautiful landscape of Chrissi is made of turquoise, calm waters and soft white sand mixed with small shells and pebbles. Chrissi attracts hundreds of tourists each year with its unspoiled landscape.

One of the most legendary places you can visit in Crete is the fantastic hippie village of Matala, on the southern coast of the Heraklion region.

The village is home to an amazing beach bordering a high cliff at the end of the beach with impressive caves. These were used as homes as far back as the Bronze Age.

Matala became well-known during the 1960s when the forgotten fishing village started attracting hippies who would find shelter in the limestone and live a carefree kind of life on Crete.

Today, the village retains some of that romantic atmosphere. It’s also possible to visit the caves to get a unique view over the bay and discover what it was like to dwell in the area. Modern-day Matala is an organized sandy beach, the sea is deep and good for snorkelling. In the area, there are many typical bars and tavernas, and it’s possible to stay in the local camping site. Definitely one of the best beaches near Heraklion!

Virtually unknown until a few years ago, Stefanou Beach, also known as Seitan Limania (or the Devil’s ports), jumped into stardom after being repeatedly featured on Instagram under the hashtag “Crete”, thus no longer one of Crete hidden gems, but still worth visiting.

The fantastic shore is in the Chania region of Crete, less than 20 kilometres from the centre of town.

The beach has a unique lightning bolt shape and is surrounded by high orange cliffs that create a striking contrast with the immense palette of blues, ranging from light blue to deep navy. One of the best beaches in Chania you should definitely include in your Crete Itinerary. From the sides of the cliffs, goats often witness swimmers as they jump from the hills into the wavy waters of the bay.

To reach the coast, you first need to hike down the mountain along a rather steep path. Besides, since the beach lacks any form of organization, it’s always a great idea to pack all your beach essentials to spend your day there.

On the northern coast in the Lasithi region, nestled in the magnificent Bay of Mirabello, the fantastic Voulisma is one of Crete’s most beautiful beaches.

The wide shore is framed by lush, green vegetation, while the yellow, soft sand gives the beach the alternative name of Golden Beach.

The sea is shallow and virtually waveless, making it a fantastic place to swim especially for families with small children. The beach is well-organized, it counts with a spacious parking lot, a wonderful taverna, and a beach bar too.

If you’re into pebble beaches, don’t miss the opportunity to check the wide shore of Triopetra, on the southern coast of the Rethymnon region. To reach Triopetra, it’s necessary to drive all the way south from the city of Rethymnon. The trip lasts about an hour but is definitely a worthwhile drive through Crete thanks to the stunning landscape you’ll find along the way.

Once in Triopetra, you’ll be stunned at the incredibly wide and long beach, as well as at the bizarre rock formations that dive into the sea on one of the extremes of the beach. These three massive rocks are what gives the name to Triopetra.

The sea in Triopetra, as in most of the Cretan southern coast, is cooler than in other parts of the island, crystal clear, and with an interesting seabed for those into subaquatic experiences. 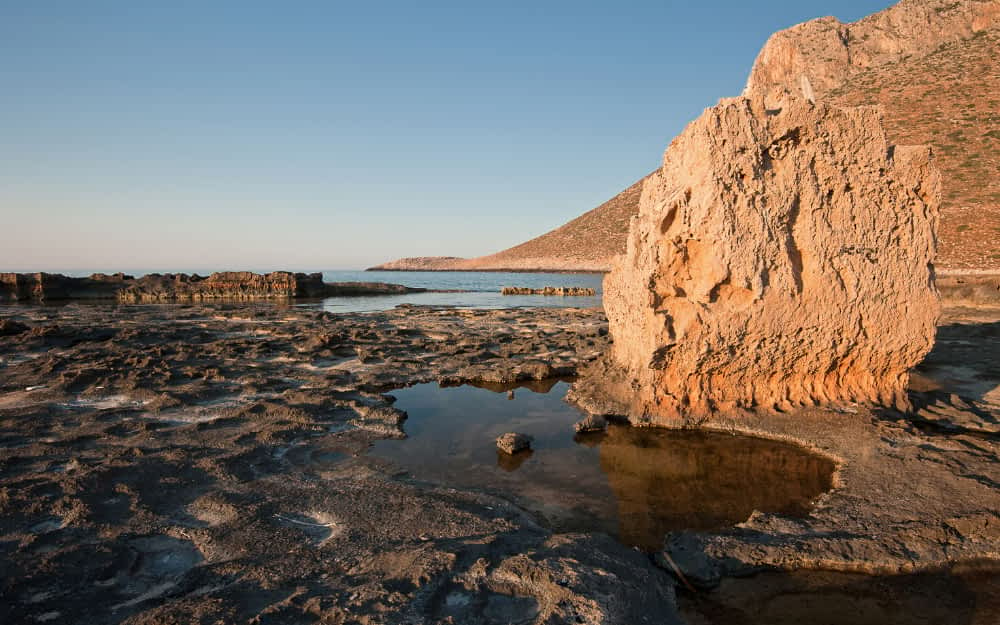 Yet another of the Chania Beaches worth visiting, the fantastic bay of Stavros is an enclosed beach on the western region, in the Akrotiri Peninsula. The magnificent backdrop of Stavros Mountain is another well-known image of Crete which made it all the way to Hollywood when scenes of the famous movie Zorba, the Greek were filmed there.

The sea is incredibly calm with deep green waters while the sand is clear, sometimes featuring a subtle pinkish colour. The beach is also famous for the magnificent orange palette that dresses the area during the sunset.

Stavros Beach is well-organized and it’s a great idea to try some of the authentic tavernas in the area, where it’s usually possible to sample some of the most authentic delicacies of the Cretan diet.

Gabi Ancarola is a travel writer based on Crete, where she writes The Tiny Book Crete Travel Blog, and where she hosts gastronomic tours in the city of Chania. She has written several books about the Greek islands and currently manages a Facebook group for those who want to plan their holidays in Crete.

How to get from Mykonos to Santorini

The best way to get from Athens to Mykonos

Top things to do in Athens

The Top Yoga Retreats to visit in Greece

Interesting Facts on the Acropolis of Athens, Greece 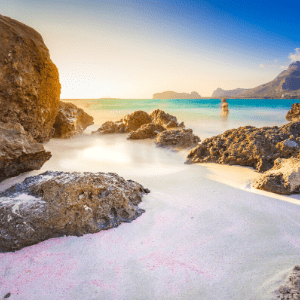 One thought on “10 Best Beaches in Crete, Greece”