How to get from Mykonos to Santorini, Greece

Are you visiting the stunning Greek Islands this summer and planning to travel from Mykonos to Santorini (or vice versa from Santorini to Mykonos)?

If so, then this travel guide is just what you need!

Travelling to Greece was undoubtedly (and still is) one of my all-time best holidays. One that I keep raving to friends and family about. We had never visited the country and its glorious islands before, so we decided to go full on tourist mode and included both Mykonos and Santorini into our itinerary, two of the most well-known and visited islands in the Cyclades.

But I can honestly say, as cliché as it may be, we absolutely loved our time on both of these islands. Not only were the people warm and hospitable, the weather gorgeous and the crystal-clear waters and white-washed buildings mesmerising, but what stood out most, the food is amazing and the incredibly romantic Greek settings these offered!!

So, all said and done, getting from Mykonos to Santorini should be the last of your worries. In this guide I’ll be outlining the best way to get between these two idyllic destinations.

Personally, I prefer taking the Mykonos to Santorini ferry and believe it’s the absolute best way to travel between these two islands. On our first visit to Greece we travelled by ferry from Athens to Mykonos and then onto Santorini.

During the peak summer months, you will find several daily departures operating this route, even up to 10 departures per day operated by the various ferry companies, such as Golden Star Ferries, Seatjets, Minoan Lines and Blue Star Ferries.

The Mykonos to Santorini ferry journey time ranges from the fastest ferry taking 1 hour 45 minutes and the slowest around 3 hours 35 minutes.

Currently you can expect to pay between €49 to €67 in price for a one-way adult ticket (when travelling without a vehicle).

During the quieter winter and off-peak months, schedules on the direct ferry services are either reduced, or you will be required to travel via Athens to connect between the two islands.

On the reverse journey, the Santorini to Mykonos ferry route offers the same frequencies, similar times and prices too.

Useful comparative sites such as Ferryhopper.com and Letsferry.gr are fantastic for consulting schedules, departure times and prices of the various ferry operators. You are also usually able to book directly through these sites too!

Important Notes for travel by Ferry

For a more comprehensive list of useful info and frequently asked questions, be sure to check out the Ferryhopper site for more.

Flights from Mykonos to Santorini

Unfortunately taking a Mykonos to Santorini flight isn’t as easy as it used to be, and for this reason I much rather prefer to use the ferries instead.

In past years, airlines such as Condor or even Greek airline Aegean Airlines used to operated direct flights between these two islands. But for this year (2020) there are no direct flights from Mykonos to Santorini available.

If you do still prefer to fly, then you are definitely able to do so, bu this will require taking a flight from Mykonos to Santorini via Athens. This routing is operated by Aegean Airlines as well as Sky Express and you are able to find daily flight departures when searching for availability, dependant on the time of year.

Of course, during the winter months, you are likely to find less frequent departures, especially compared to the peak summer months.

It is worth noting that these flights do tend to fill up quite quickly during the peak summer periods. So, it’s advisable to try book as far in advance as possible, to secure your flights.

Another reason I don’t advocate this method of travel between Mykonos and Santorini is simply because of the total journey time. Although the flight from Santorini to Athens is around 45 minutes and from Athens to Mykonos around 40 minutes, you do still need to consider time to check in, pass through security, the transit time as well as baggage collection when you arrive at your end destination.

All things considered, you will likely end up with a total travel time of 4 hours or more, compared to the roughly two and a half hours on the ferry, which in my opinion makes travel by ferry pretty much a no-brainer.

If you’re still needing to book your accommodation for either Santorini or Mykonos, then go ahead and have a look at rates and availability for each location on the links below. ** Our Top Choice in Mykonos ** – Aether Boutique Stay. I cannot rave enough about this place. We were so glad we booked the Aether Boutique Stay for our trip to Mykonos. Athena and her husband were incredible hosts. Athena’s warmth and hospitality made us feel right at home. She truly cares for all the little details that make a holiday truly magical. Although it’s not in the heart of the old town in Mykonos, it’s just a short way out. But the overall experience was fabulous and I would go back in a heartbeat! Mykonos accommodation options. Santorini accommodation options.

What to do – Tours & Activities

There is honestly so much to see and do on both of these Cyclades Islands. Why not go ahead and jazz up your Greek adventure by booking a couple of unique tours & excursions that will no doubt round out your holiday nicely.

I have no doubt in my mind that you will have a truly memorable time when visiting either of these two islands. Mykonos will not disappoint, with its windmills, white and colourful contrasting old town to the turquoise blue waters at the numerous stunning beaches found on the island. And neither will Santorini with breath taking views from where you’ll be perched high up top, to the sunsets, yet more white-washed and charming villages and as already mentioned, the delicious food.

Given the options available to you as outlined in this travel guide, you really should have no problem at all when travelling from Santorini to Mykonos or vice versa, via ferry or flight.

Have you visited these Islands before? What was your preferred mode of transport?

I would love to hear your insights into what worked best for you. Please feel free to share your comments, questions or any insider tips that I may have missed out on, in the comments section down below. 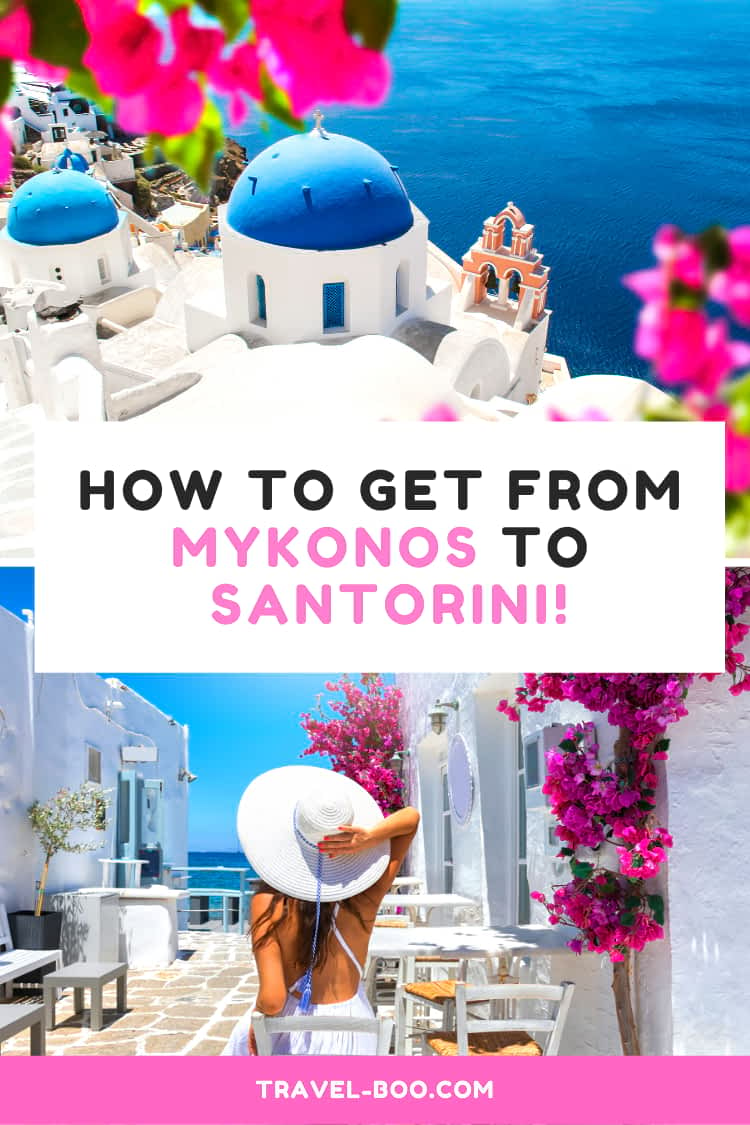 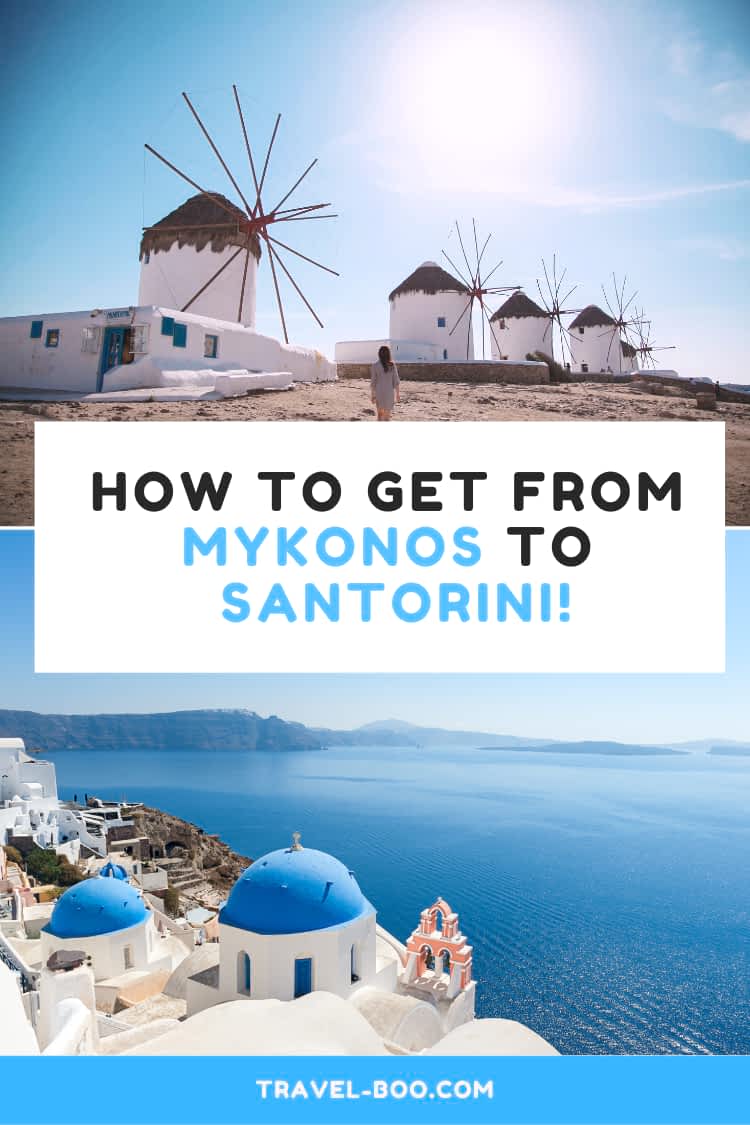 Top Things to do in Athens

Weather in Greece in October

Best Things to do in Chania, Crete

Greece Island Hopping on a Budget

Interesting Facts on the Acropolis in Athens 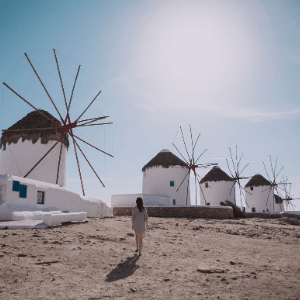