How to travel from Madrid to Segovia – Transport Guide

Segovia, situated in the Castile and León region in central Spain is truly one of those places that seems to have been plucked straight out of a fairy-tale.

With it’s stunning historic architecture including the impressive and imposing Cathedral, the castle, aqueduct and historic centre to name but a few, it is easy to see why Segovia is such a popular choice as a day trip from Madrid.

Also, in its favour is the fact that Segovia is situated only around a half hour from Madrid, making it an excellent choice if you have some extra days at your disposal to explore beyond Madrid.

But how exactly do you travel from Madrid to Segovia, you may be asking?

Well, look no further because in this guide I’ll outline all the various ways and modes of transport you could use to travel from Madrid to Segovia.

Whether doing so by train, bus, car or organised tour, we have you covered!

Tip: Don’t forget to check out my Spanish packing list, helping you plan for your visit to Spain!

Madrid to Segovia by Train

Undoubtedly, the most popular and fastest way would be to take the train from Madrid to Segovia.

Spanish train operator, Renfe, runs a frequent and daily schedule of trains between these two destinations with a journey time of just under 30 minutes.

Depending on the service booked, ticket prices range from around €14 upward in price, the most expensive being just under €25 for a one-way fare.

You can also quite easily book your tickets for the Madrid Segovia train online through a comparative site such as Omio, in order to avoid any delays or queues at the train station.

Renfe will allow you to book up to 3 months in advance for this particular routing.

On the Madrid to Segovia train service, the trains start running from as early as 06:40 am, generally with around 30 to 40-minute intervals between the next departure. The last train departs at 21:30 pm at night.

Weekend trains depart slightly later, usually starting from 08:00 am and also run until 21:30 pm at night.

These times & frequencies do vary, so it is a good idea for you to consult the train schedules directly on the Renfe site to confirm.

Upon the return, the trains from Segovia to Madrid start operations at 07:00 am in the morning up until 23:01 pm at night on weekdays.

Again, weekend departures do vary, starting only from 08:27 am and run until late at night.

As mentioned before, make sure to consult the schedules online when you are planning for your travel dates, as times may be different.

From Madrid, all these trains depart from and arrive back into the Estacion de Chamartin (Madrid-Chamartin station).

You can quite easily reach the station by using the Madrid metro to the Chamartín metro stop which is linked to the station.

Important – do not confuse this metro stop with Pinar de Chamartín which is a completely different stop altogether.

Trains arriving into Segovia do so to the Segovia-Guiomar station. Unfortunately, the station is located a few kilometres outside of the main touristic centre. But, it’s pretty easy to catch the bus into town from here.

There are two bus services that depart from right outside the train station. The Bus 11 is a  bit slower but stops right outside the Aqueduct. Whereas, the Bus 12 which is a bit quicker than 11, stops around 5 minutes walking distance from the city centre.

Either of these two are good and given that they cost only around €2 one-way, it’s a quick and cheap connection from the train station to the city centre itself.

Click here to search and book your train ticket through Omio.

The second public transport option between these two cities would be to travel from Madrid to Segovia by bus.

Operated by the coach company, Avanzabus, the journey will take between 1 hour 20 minutes to 1 hour 45 minutes to get from Madrid to Segovia.

Avanzabus runs a very frequent and cost-effective service on this route with a one-way ticket costing as little as €4.05.

These buses are also direct services, meaning they don’t make any stops along the way.

On weekdays, the Madrid Segovia bus starts departing at around 06:30 am in the morning up until 23:15 pm at night. There are frequent departures, with buses leaving every 15 to 30 minutes throughout the day.

On weekends the times vary slightly. Departures start at 08:00 am until 23:00 pm at night.

Be sure to consult the up to date schedules when you are planning for your trip. You can do so and also book directly online through the Omio site as well. Great for comparing both train and bus options.

Upon the return from Segovia, the bus service back to Madrid starts operating as early as 05:35 am up until 21:45 pm at night on weekdays.

Again, on weekends the times alter slightly. Departures then start at 07:30 am and run throughout till the last bus leaves at 21:30 pm at night.

The bus services out of Madrid all depart from the Estación de Autobuses de Moncloa (Madrid Moncloa bus station).

The station is connected to the metro (there are two lines connecting to it), with the metro stop of the same name, Moncloa, providing easy access.

When arriving into or depart from Segovia, you will do so from the Estación De Autobuses Segovia which is located in Paseo Ezequiel González and conveniently located close to all the main attractions and city centre.

Important: Do note that the bus stops in two places in Segovia. The first stop is Segovia Zorrill and then the 2nd stop (and the one you want to get off at) is the Segovia Bus Station. Thus, be sure to stay on the bus, only getting off at the 2nd and final stop.

If you prefer to have more of an immersive experience, being led by a knowledgeable guide then you may also consider joining a guided tour on a day trip from Madrid.

There are various tours on offer. Some also including stops at other memorable Spanish places of interest along the way.

Click here to view rates and availability for Madrid to Segovia Day Trip.

Driving from Madrid to Segovia by Car

Journey Duration: Between 1 Hour 10 minutes to 1 Hour 30 minutes Although, technically the distance from Madrid to Segovia is only around 100 kilometres and should take under 1 and a half hours, traveling by car may not work out the most convenient way to travel. I use the term ‘technically’ because let’s be real, Madrid is a huge and buzzing metropolis and getting in and out of the city as well as travelling to, and finding parking in Segovia may all add extra time to your trip. Also take into consideration that part of the route will be on tolled roads too. As such, you’ll probably end up paying much more than simply catching public transport. In my personal opinion, it is best to take either the train or bus and travel pretty much hassle free to Segovia, whilst enjoying the scenery along the way! Renting a car If you still prefer to rent a car and drive, then you can certainly do so! Have a look at RentalCars.com for rates, availability and booking terms of the different rental agencies available from Madrid.

Are you looking to book accommodation in Madrid or even considering staying a night in Segovia?

Have a look at the below Booking.com links for availability and rates.

Check here for accommodation in Segovia.

You can also search here for the perfect Segovia Airbnb, or here for Airbnbs in Madrid.

What to do in Segovia

If you are on the hunt for exciting tours, activities or unique experiences to complement your trip to Segovia? Then have a look at this link for a range of tours & activities for Segovia here.

I’m absolutely certain that a visit to stunning Segovia will be a highlight of your trip to Madrid! There is so much gorgeous history and culture to observe and enjoy that will no doubt leave lasting memories.

If you have visited this historical gem as part of a day trip or even spent some time overnight here, then I’d love to hear your thoughts on the best way of travelling here.

I would also love to hear your insider tips & suggestions that I may not be aware of, or have missed out on. So, feel free to comment and share this in the comments section below. 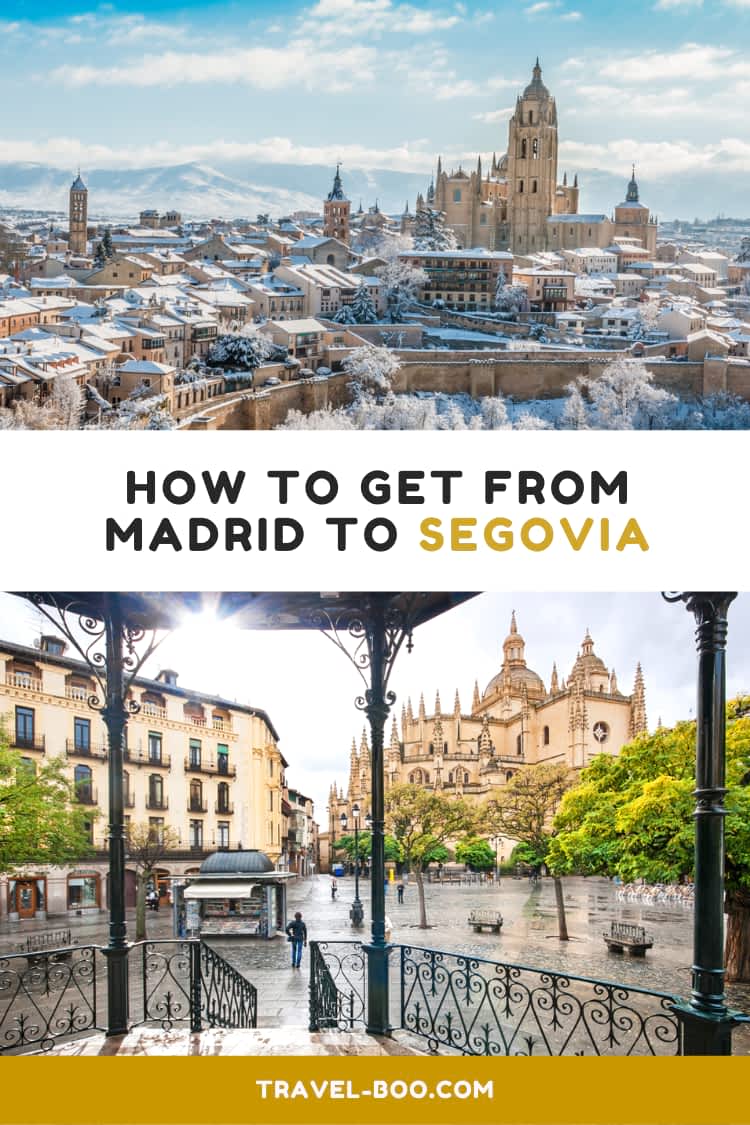 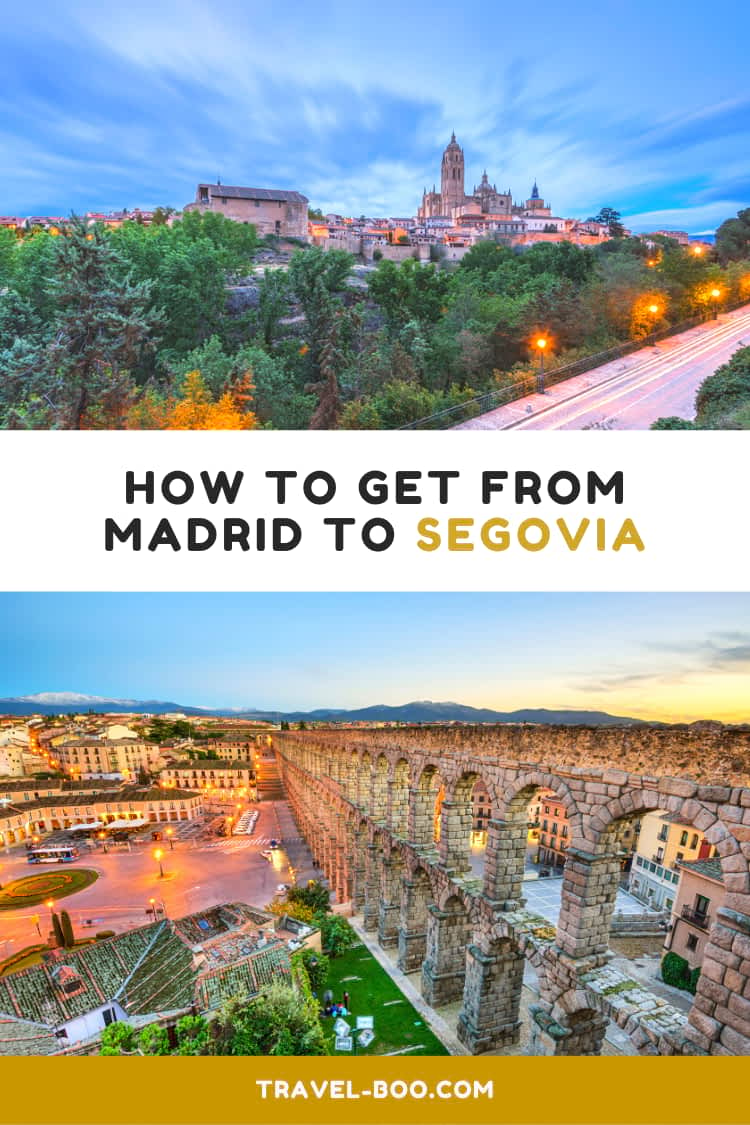 How to get from Madrid to Cuenca 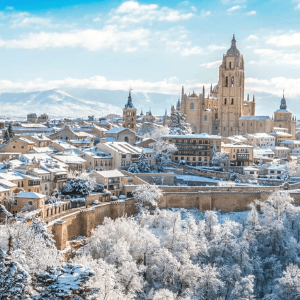