Looking for a Lecce Italy Travel Guide? Look no further.

Lecce, situated in Italy’s heel region of Puglia, is famed as the ‘Florence of the South’ due to the incredible baroque architecture of its old town district and undoubtedly one of the most beautiful places to visit in Italy.

With over 2,000 years of history and Roman origins dating back to Emperor Hadrian, Lecce is a striking city boasting an incredible number of remarkable buildings and monuments.

If you’re looking to discover Lecce on a visit to Puglia, then this Lecce Travel guide is for you! Here I’ll outline all the information you’ll need to help plan and coordinate for your next travel to Lecce.

What are you waiting for? Make sure to add Lecce to your Italy Bucket List today! 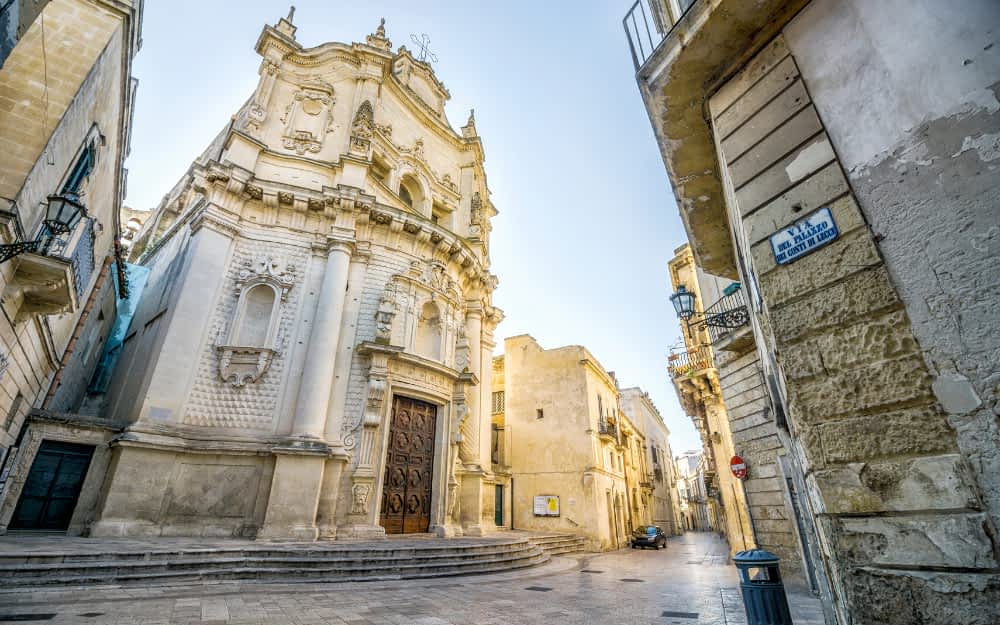 The joy of a visit to Lecce is to experience the fascinating and beautiful history first hand.

Slowly amble through the maze of narrow streets within its historic centre, gawping in amazement at its magnificence. Combine this with regular stops for espresso or a local glass of wine at one of the many charming bars and restaurants.

Lecce is the perfect place to slow down, admire its many sights and sounds and use as a base to explore the rest of the gorgeous Puglia region.

Almost central to the heel section of Italy, Lecce is one of the country’s most Eastern cities. The major ports and arrival cities of Brindisi and Bari lie 40km and 150 km north respectively.

Popular Puglia resort towns of Otranto on the east coast and Gallipoli to the west are both 40 km or a 30-minute drive away.

Rome, Italy’s capital is close to 600 km and a 6-hour drive north-west. Genoa, another Italian city that’s perfect for a city break is over 1,000 km away in the country’s north-west corner.

How to get to Lecce?

It is worth noting that Lecce Airport does not receive commercial flights. Instead, International visitors to Lecce, and in fact, the Puglia region will arrive at either Brindisi or Bari airports. From either car rental is straight forward and onward car journeys take 30 minutes or 2 hours respectively.

Trenitalia services reach Lecce from most major Italian cities. Train journeys on the Rome to Lecce train will take 5 1/2 hours and Bologna in the north of the country 7 hours. From Naples on the country’s west coast, the journey will take around 6 hours and require a change at Caserta.

The Lecce train station is situated approximately one 1 km south-west from the Porta San Biagio entrance to the old town. A taxi rank is located directly outside the entrance.

Lecce also makes a fabulous and convenient base from which to explore the rest of the Puglia region. Known for its small whitewashed hill towns and stunning coastal resorts such as Polignano a Mare Puglia which in itself are fantastic to tour by motorhome. To help you plan your own tour read our ‘Top 10 Motorhome Stops in Italy to get you off the Beaten Track.’

Located in the heel of southern Italy, the weather in Lecce boasts a warm and temperate Mediterranean climate with hot summers and relatively wet winters. August can be humid making a walking tour of the city at this time uncomfortable. Instead, consider a visit in spring or early summer months.

Average temperatures vary throughout the year, ranging from highs and lows of 13˚C/4˚C in January through to 32˚C/20˚C in August.

Lecce accommodation: Where to stay in Lecce

Looking for the best Lecce Italy hotels to stay at? Make the most of your trip and book a stay in this gorgeous jewel of Puglia. Here is a selection of Lecce hotels you could book for your stay:

As you explore its many lanes and allow Lecce and its history to enliven your senses and engulf you in a relaxed vibe, then these are the principal buildings and monuments to look out for.

With so many wonderful sights to explore and things to do in Lecce, you’ll have plenty to keep you occupied during your stay.

Trust me even amongst an old town district filled with beauty, these sights are hard to miss!

The Piazza Sant’Oronzo is the main square and focal point of the old town district. From here run many narrow streets leading to the far corners of the old town tempting you to explore the city further.

The many architectural styles clearly illustrate the depth of the city’s history and it is where modern life of fast food and shopping brands meet Lecce’s Roman origins.

The north modern section with its mosaic of the Lecce coat of arms is also home to regular markets and free concerts.

To the south is the location of the Roman Amphitheatre and the column of Sant’Oronzo. 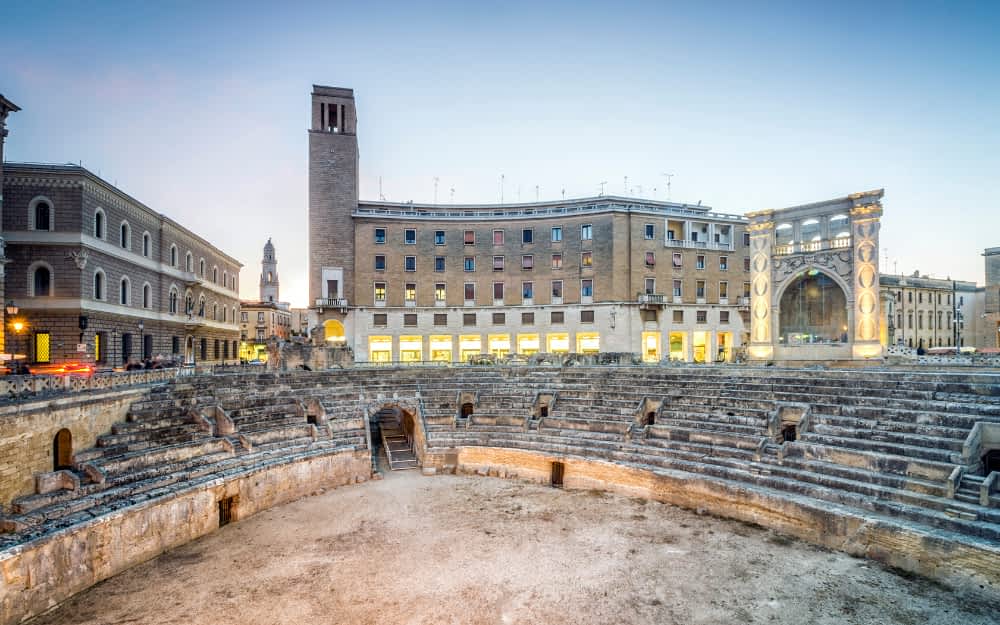 Home to gladiatorial concerts akin to the world-famous Coliseum of Rome, just a quarter of this impressive monument dating back to the 1st & 2nd century AD is visible today. Astonishingly these remains were not discovered until 1908 and even then by chance as other building works in the square were undertaken.

Looking down into the arena from the Piazza above it is easy to conjure images of the violent scenes of combat and death that would have caused such fervour in the crowd of 25,000 people.

It is free to visit the Amphitheatre at any time of the day.

From the northern corner of the Ampitheatre rises the 29-metre tall Column of Sant’Oronzo. Depicted in the act of blessing the city below him is Lecce’s patron saint so designated after he reputedly cured Lecce and the surrounding region of the plague.

The column itself is one of two that originally marked the end of the Appian Way running between Rome and Brindisi.

Located just 300 metres and less than a 5-minute walk west from Piazza Sant’Oronzo is the stunning Piazza del Duomo.

Unlike its larger neighbour, the Piazza del Duomo is all about its history. Boasting some of Lecce’s most wonderful examples of Baroque architecture the Piazza has a stately and supreme air not experienced anywhere else in Lecce.

Unusually for such a magnificent square, the Piazza del Duomo is completely enclosed by buildings except for a small access gateway to its northern elevation.

As the square opens up in front of you and the open-air museum reveals its splendid treasures you are engulfed by a strange combination of awe and intimacy. This awe at the beauty and craft of our forefathers and intimacy despite its grandeur creates an unforgettable memory of your visit to Lecce. 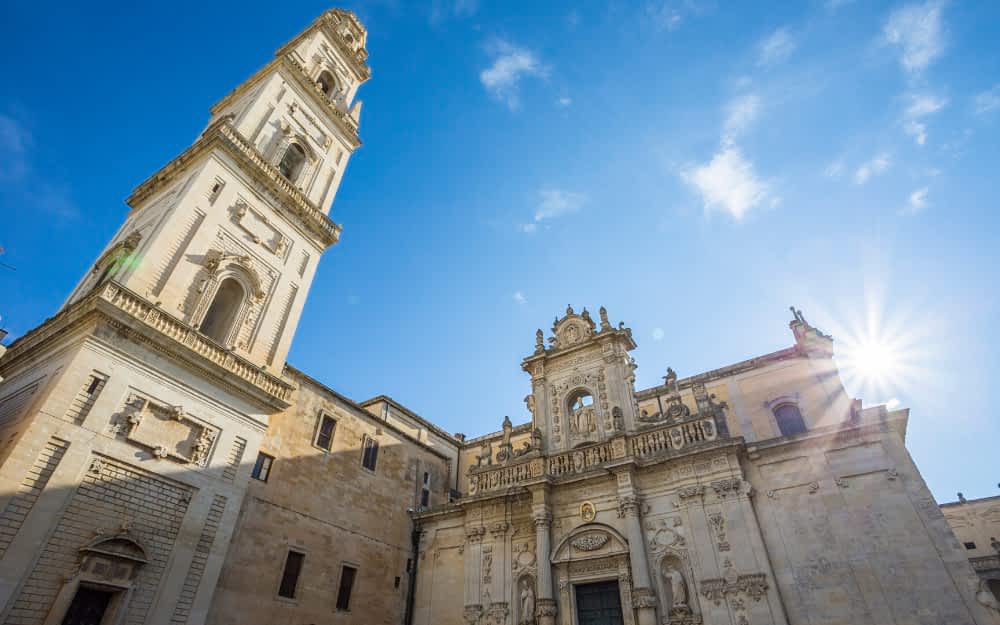 The Cathedral of Lecce that was built in the year 1659 by Giuseppe Zimbalo, is one of the city’s most important religious buildings and is yet another wonderful example of Leccese Baroque architecture.

Its two ornate facades decorated with cherubs, saints and grotesque figures is as splendid as the opulent interior of gold artwork and grand arches.

Entrance to the Cathedral is free and generally open between 09.00 and 18.00 each day. 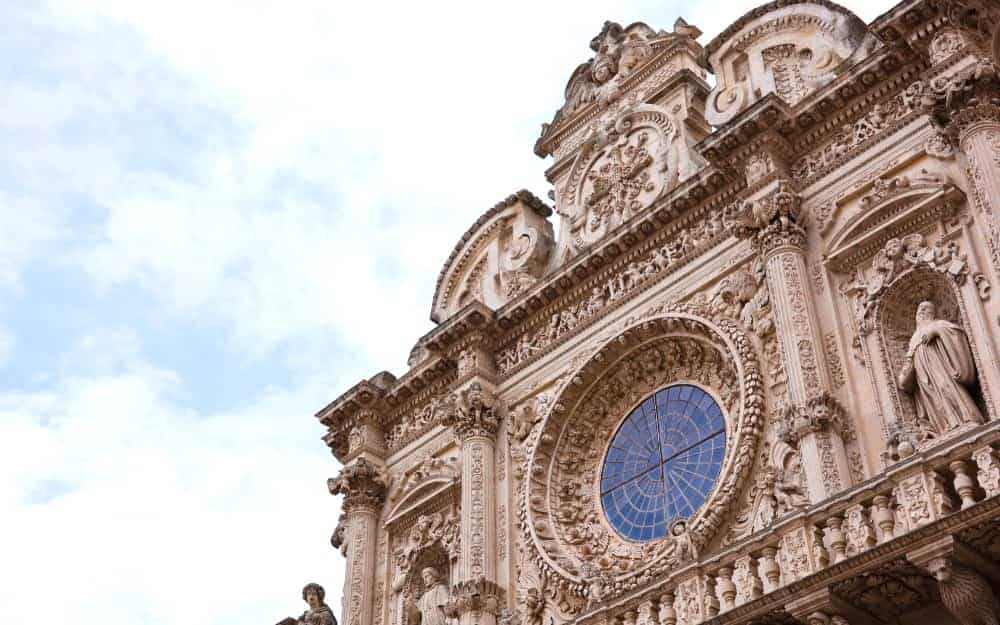 After the brilliance of the two Piazzas and their respective architectural gems, only the Basilica di Santa Croce can match their splendour.

The Basilica, or Church of the Holy Cross as it is also known, is one of Lecce’s most beautiful buildings boasting a glorious Baroque facade and stunning architecture. Even non-architecture buffs will lose themselves in the splendid artwork and artistic finery of the facades columns, grotesques and stone reliefs. Don’t miss the large rose window together with surrounding carvings.

Rebuilt by successive generations between 1549 and the mid 17th century the Basilica is a true labour of love and elegant celebration of determination.

The historic centre of Lecce has three principal entrances each celebrated with its own commanding arch.

Also known as the Arco di Trionfo or the Triumphal Arch, Porta Napoli is the most celebrated of these three arches.

Built in the year 1548 in honour of Emperor Charles V this 20-metre tall arch stands at the city’s western entrance. It was designed by Gian Giacomo dell’Acaya who also built the Castello di Lecce.

The arch’s impressive design includes two Corinthian columns either side of the central arch supporting a triangular gable embossed with weapons and a central Habsburg Imperial coat of arms. 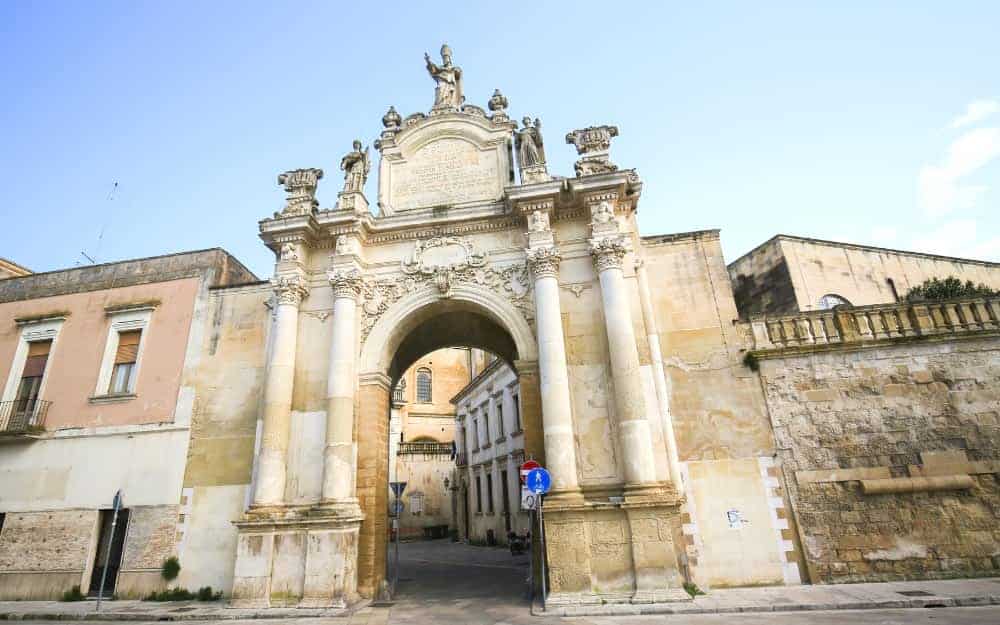 Porta Rudiae, the oldest gate of Lecce standing at its southwestern entrance was rebuilt in 1703 following the collapse of the original. Its design consists of one single arch with double columns supporting a frieze of busts of the city’s mythical founders.

Located to the southern entrance the Porta San Biagio dates back to 1774 and is named after Bishop Saint Biagio.

This narrower archway is topped by the crest of the city of Lecce and Ferdinand IV of Bourbon.

Located just 250 metres east of the Piazza Santa’Oronzo the Castle of Charles V or Castello di Lecce served as the city’s main defensive fortification following its construction in the 16th century. The traditional design of four corner structures and high walls remains in splendid condition.

Today the Castle is perfect for a pleasant walk through the grounds, the seat of cultural affairs for Lecce and also home to the Papier-Mâché Museum.

The selection of monuments, piazzas and buildings covered here is a mere selection of the countless treasures of Lecce’s historic centre.

A fully comprehensive guide of what to see in Lecce would be an encyclopedia sized document and take an army of people to produce.

The only way to understand Lecce’s beauty and its undoubted appeal is to explore its unique old town for yourself. And trust me when you do your own list of highlights will inevitably include many other sights I missed on my own tour of this fascinating city.

Contribution by Paul from The Two That Do 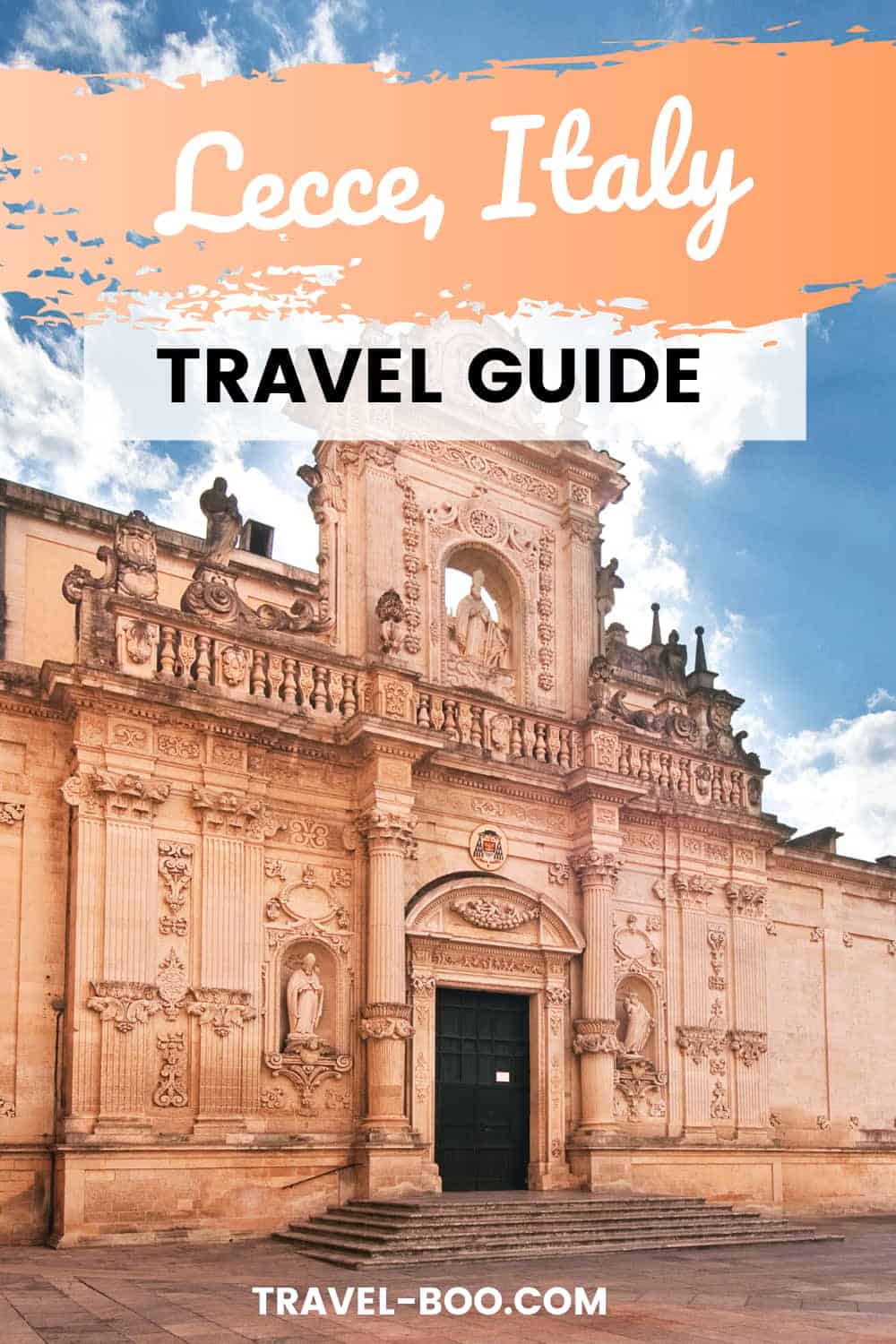 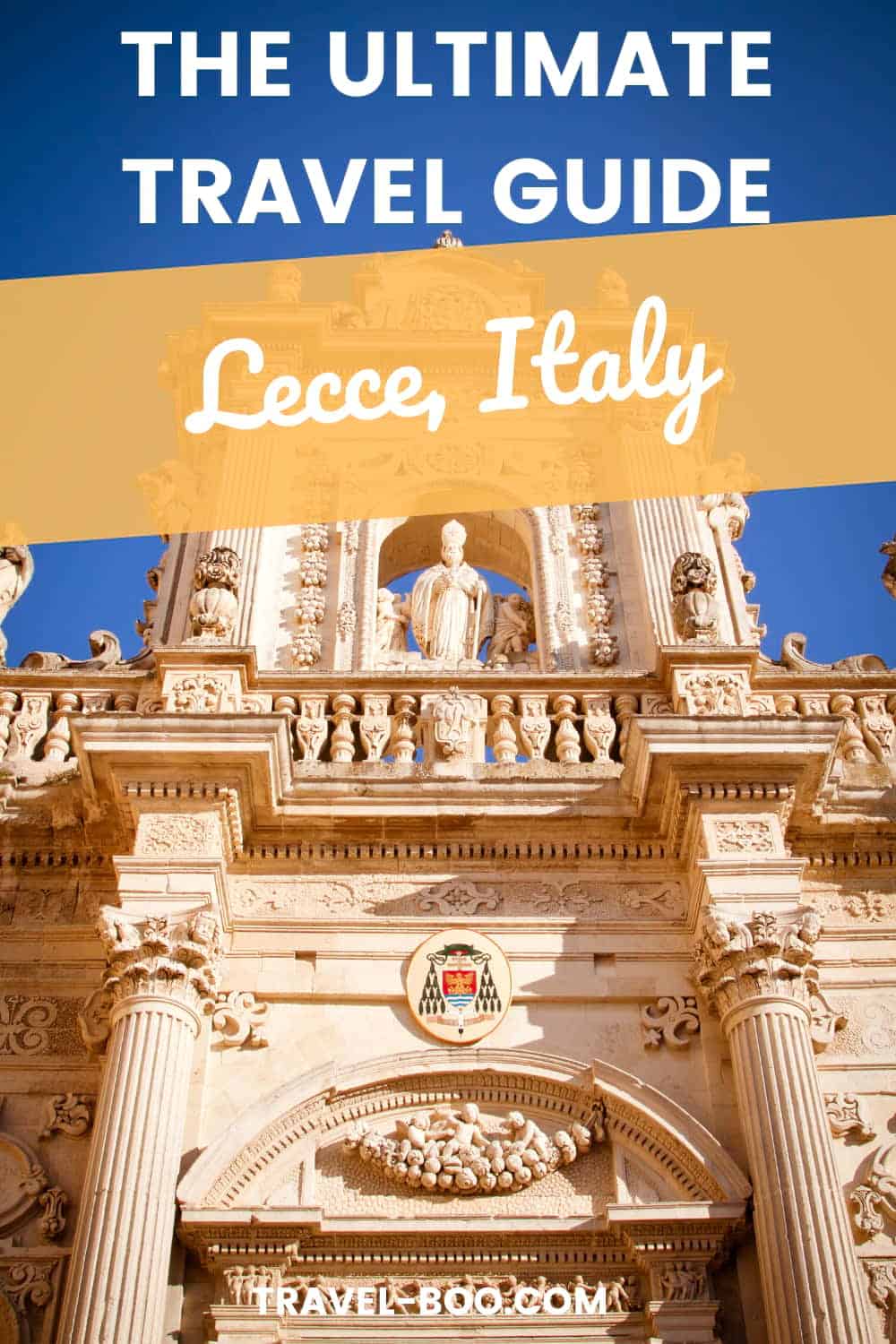 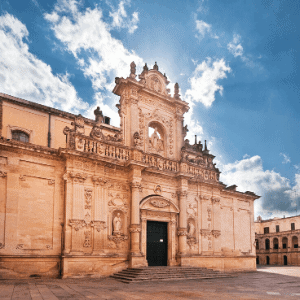