How to travel from Madrid to Cuenca – Transport Guide

The impressive historic walled city, Cuenca in Spain, that is also an UNESCO Heritage site, and perched precariously up top a mountain, is simply gorgeous.

Known for it’s steep and cobbled streets, the cathedral, the famous hanging houses and a range of other notable sites (like the Abstract Art Gallery) is a must see when visiting Spain.

Given that it’s reachable from Madrid in under an hour, it makes for a great day trip. Although, also a fantastic overnight stop if you are travelling along throughout the rest of Spain.

But how exactly do you get from Madrid to Cuenca?

In this guide I will detail exactly how to do so. Whether by train, bus or car, you have several quick and cost-effective options to choose from.

My first suggestion and also the fastest way to travel between Cuenca and Madrid would be to travel from Madrid to Cuenca by train.

Spanish rail company Renfe, operates an excellent high-speed train service throughout the country, as well as on this particular route.

By using these trains, the journey generally takes just under an hour to complete.

Currently, there are quite a number of departures daily, almost 18 to be exact, with prices as low as €13.40 for a one-way fare.

These tickets can be booked online, directly through the Renfe website.

Note: You can usually book roughly 2 and a half to 3 months in advance on the website.

Tip: I’ve heard of travellers having trouble when booking these tickets online as a return journey. If this happens to you then rather book each leg separately as a one-way, which should then work.

Train from Madrid to Cuenca

The Madrid Cuenca train normally runs from 06:45 am in the morning till 21:15 pm at night on weekdays. Offering, as already mentioned, around 18 departures throughout the day.

On weekends, the trains start running slightly later, from 07:45 am up until the last train at 21:10 pm, or there around.

I would highly recommend when planning your trip, to go ahead and consult the train schedules based on your actual travel dates as these times may vary or change.

Upon the return journey, the Cuenca to Madrid train service usually operates from 07:28 am up to the last train departure at 21:47 pm at night, on weekdays.

Also, offering a similar number of frequent departures throughout the day.

Departure times over the weekends vary slightly, running between 08:58 am to 21:47 pm on Saturdays and Sundays.

Again, be sure to check the schedules to confirm the times and availability based on your own travel dates.

When leaving from Madrid, you will do so from Madrid’s Puerta de Atocha train station which is connected to the Madrid subway system (metro stop Atocha Renfe).

Note: Do take note that Madrid’s Atocha station is so large that it actually has two sections. Atocha Cercanías which services local commuter trains and then the Puerta de Atocha, from where you will take the high-speed AVE trains to Cuenca.

When arriving into or departing from Cuenca, you will do so to the train station named the Estación de Cuenca-Fernando Zóbel. There are two stations in Cuenca, but this is the one where these high-speed Madrid to Cuenca trains will arrive into.

As is often the case, the train station is located a short drive out of the main city centre.

Being around 6 kilometres out, you may opt to take a taxi into town or you could also take the local bus and get off at the Plaza Mayor which is situated in the historic city centre right in front of the Cathedral.

Keeping to public transport options, the second and slightly longer route to take would be to travel from Madrid to Cuenca by bus.

Avanzabus offers a daily service between the two cities that takes anywhere between 2 hours 5 minutes to 2 hours 30 minutes (depending on the bus booked).

At present, a one-way ticket will set you back €13 and this can also be booked online through their website.

The Madrid to Cuenca bus service has 9 scheduled departures on weekdays, starting from 06:45 am until the last bus departs at 22:00 pm at night.

The return service from Cuenca to Madrid offers the same number of daily set departures and on weekdays and Saturdays operate between 07:15 am up to 20:00 pm at night.

On Sundays, the Cuenca Madrid bus service runs from 08:00 am in the morning until 20:00 pm at night.

Similarly, to the train services, I would recommend that you consult the update to date schedules when you are planning your trip as times may change and vary throughout the year.

Leaving Madrid, the Avanzabus services depart from the Estacion Sur bus terminal. To get here you can simply catch the metro to the metro stop – Méndez Álvaro, which is situated right at the bus station.

In Cuenca the buses arrive into the bus station called the Estacion de Autobuses Cuenca and situated in Calle Fermín Caballero.

The station is roughly around 1.7 kilometres from the historic city centre (from the Cathedral in Plaza Mayor).

The centre can be reached by taxi or by taking the local L1 bus service that drops you right at the Plaza Mayor.

Driving from Madrid to Cuenca by Car

Journey Duration: Between 1 Hour 45 minutes to 2 Hours Lastly, if you much rather prefer to travel at your own pace and not be bound by schedules, then renting a car and driving from Madrid to Cuenca may be the best bet for you. The distance from Madrid to Cuenca on the quickest route, via the A-3 and A-40 motorways, is approximately 170 kilometres and should take around 1 hour 45 minutes. This may be in theory though, as it is worth remembering that Madrid is a massive city with lots of traffic at times. Getting in and out of the city may end up adding loads more time to your total travel time. Do take this into consideration if you are running on a very tight schedule. Renting a car If you are needing to rent a car for this trip or for the duration of your stay, then check here for the availability and rates based on your travel dates – RentalCars.com. We’ve personally found this site to be very user friendly as well as offering great rates too. They compare a wide range of different providers all on one site, so you can compare and book without the hassle of trawling through several different individual provider websites.

Wanting to add on a few unique tours, activities or experiences to make your trip to Cuenca a really memorable one? Whether you are keen on taking a guided tour, an historic city walking tour or even looking to book a day trip from Madrid, there is a tour to suit everyone. Check out these and many other activities and experiences on offer, to see if any may be of interest. View rates and book Cuenca activities & tours here.

When planning a visit Cuenca, it really should be a breeze to firm up your travel options from Madrid.

Whether travelling from Madrid to Cuenca by train, bus or car, you have all the options available to suit your personal preferences, budget and itinerary.

If you’ve already visited this historic gem, then I would love to hear your feedback!

What do you think is the best way to travel and do you have any other tips & insider notes to add on to what I’ve already outlined in this guide?

Feel free to share these and more in the comments section down below. 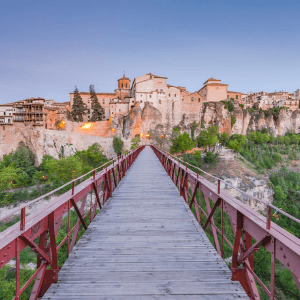